Zidane vows Real Madrid will 'fight to the end' in title race after...

Zinedine Zidane has vowed that Real Madrid will "fight until the end" against Atletico Madrid after they snatched a late point against the leaders in La Liga to keep the title r... 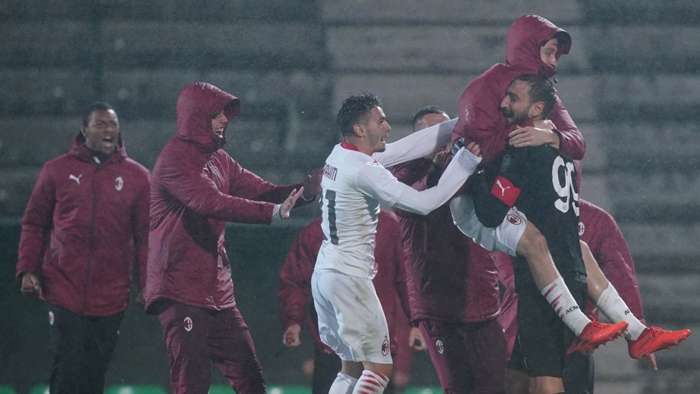 Stefano Pioli was delighted with AC Milan's thrilling win over Rio Ave after a rollercoaster of emotions in the Europa League play-off.

AC Milan led through Alexis Saelemaekers before Francisco Geraldes equalised, and Rio Ave went ahead in extra time thanks to Gelson.

But Hakan Calhanoglu converted a 122nd-minute spot-kick to force an extraordinary shoot-out after Rio Ave defender Toni Borevkovic was sent off.

The Rossoneriwon the shoot-out 9-8 and in the processprevailed on penalties in Europe for the first time in 17 years.

Manager Pioli said the emotions of the clash were overwhelming, but he was thrilled to reach the group stage.

"It's difficult to control emotions. We went from the possibility of winning to losing in an instant and vice versa," the AC Milan head coach told a news conference, via Sky Sport .

"The penalty lottery has given very strong emotions and a great joy for having overcome a difficult opponent. We have reached the first goal of the season and you don't win without suffering."

The likes of Saelemaekers, 21, Matteo Gabbia, 20, and Daniel Maldini, 18, started for AC Milan.

Pioli, whose side have also won their opening two Serie A games of 2020-21, praised the character of his team.

"We were strong, especially mentally, with a very young team," he said. "Some were also in their first experience in Europe. I'm very satisfied with the final result."

AC Milan are in league action again on Sundaywhen they host Spezia.

A hat-trick from Harry Kane sealed the comfortableresult for Jose Mourinho's side, but the Spurs boss wasn't too impressed by what he saw.

"We didn’t play amazing. The game was a bit strange; it was too open. In my opinion, they were too adventurous to play against a team of a different level and we punished them in this kind of transition situations," he told Premier Sports.