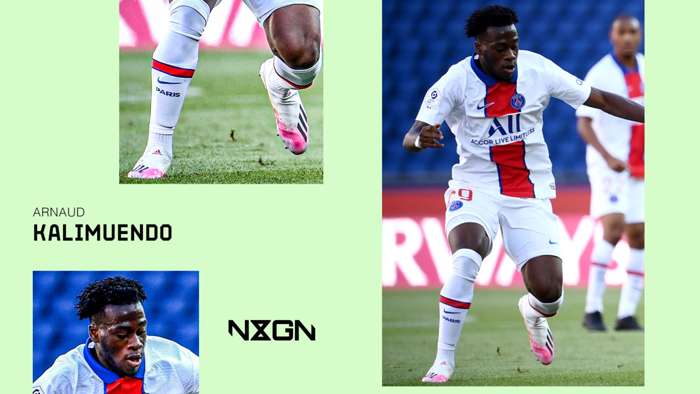 Paris Saint-Germain are not short of attacking options, that is for certain.

For some, they might be the most fearsome group on the continent.

As such, being a young striker at Parc des Princes who dreams of breaking into the first-team squad is probably quite a daunting position to be in.

And yet that is the challenge facing Arnaud Kalimuendo.

The 19-year-old has been with PSG since the age of 10 after beginning his footballing education with local side FC Saint Cloud in the Parisian suburbs, with his eye for goal having consistently been his key attribute.

In two seasons from the beginning of the 2018-19 campaign he scored over 60 goals for the club's various youth teams, including nine in 10 games in the UEFA Youth League.

That led him to the fringes of the first team, but breaking through into such a star-studded squad has proven difficult for a host of academy graduates over the past decade.

Just last summer, Kalimuendo's former team-mates Tanguy Nianzou and Adil Aouchiche decided against signing new contracts in a bid to earn first-team minutes elsewhere, and with his own deal entering its final 12 months, Kalimuendo might have been forgiven for following in their footsteps.

Instead, he has backed himself to succeed where others have failed, with his first season at Ligue 1 level suggesting it was a gamble worth taking.

Kalimuendo is spending the campaign with newly-promoted Lens, though he did have chance to make his PSG debut on the opening day of the season before signing a new four-year contract on the day of his temporary departure.

So far for his new club,the France youth international has scoredfive goals in all competitions, including four in 18 Ligue 1 appearances.

Though that may not sound like many, it is important to point out that no NXGN-eligible player (those born after January 1, 2002) has scored more in any of Europe's top five leagues this season.

He also became the first Lens player in 70 years to score in each of his first three starts for the club, with his development clearly accelerating as he gets to grips with the rigours of the senior game.

"My season is going well. I'm blossoming, but I know that there are still a lot of matches to go," the teenage star that his new team-mates have nicknamed 'Kali' tellsGoal.

"For me, Lens was the ideal club. There was everything I was looking for, and I was made to understand that I would have playing time. Once I knew that I did not hesitate for a second to come here.

"I can see that I am not the same player as I was six months ago. I have matured a lot in my game but I still have work to do every day because I still have areas for improvement.

"You should never stop questioning yourself. I'm always trying to find solutions, because I know I can do better and I am going to do better."

That drive to constantly improve is something he picked upwhen training alongside some of the global superstars in PSG's squad, with even the best aware that they have more to give.

"I learned a lot last season from great players like Neymar, Mbappe, Icardi and Edinson Cavani," the teenager continues. "I improved my control when in front of goal, which was something I really wanted to learn from them.

"Their seriousness and their professionalism - when you rub shoulderswith these kinds of players you pay attention to everything.

"It was like being in a dream. These are players you admire and then they are your team-mates. It was a great thing for me as a young player."

Though he now finds himself in less high-profile company, that does not mean Kalimuendo - who has been noted for his strength and speed at youth level despite standing at less than six feet tall -has stopped learning from the great and good of the game.

Just last week hewatched on from afar as Mbappe and Erling Haaland lit up the Champions Leaguewith five goals between them, and Suresnes-born youngster is always keen to study the world's best forwards in a bid to reach the summit of the gamehimself.

"I try to be inspired by the greatest in order to improve myself, because to reach the top level you have to be good in all aspects," he says. "I want to be the most prolific of strikers.

"When I saw Kylian score his hat-trick, I was very happy for him because he's a friend and it's always good that he helps the team win. It was good from Haaland too. Seeing that makes me want to surpass what I'm producing now.

"I watch pretty much all the top strikers in the world. I watch the best like Robert Lewandowski and Haaland, who is a real killer. Sergio Aguero, Harry Kane andLuis Suarez are all players I watch, and I can draw something from each of them."

Kalimuendo's trueidol, though, is Brazillegend Ronaldo, whom the youngster very briefly crossed paths with at the Under-17 World Cup in 2019.

Ronaldo was tasked with handing out the medals following the third-placeplay-off in Brazil; a game in which Kalimuendo scored a hat-trick as France beat the Netherlands.

"Everything went so quickly," he recalls. "We were going to pick up our medals and the head of our delegation said to him 'he was the one who scored all the goals' about me.

"He replied: 'Yes, I saw. Congratulations. You must keep playing like this'. I looked him in the eyes and said to myself 'wow'. I was in total awe of him.

"I will never forget his words. It was incredible. Those images will be engraved in my mind forever."

If Kalimuendo is ever to reach the levels of his footballing hero, then the next step in his career will be crucial.

Lens have the option to sign him permanently this summer while PSG would likely be keen to get a closer look at the player following his year playing with and against men for the first time.

Regardless, it is clear that Kalimuendo has a good head on his shoulders as he plots his own path towards the top of the game.