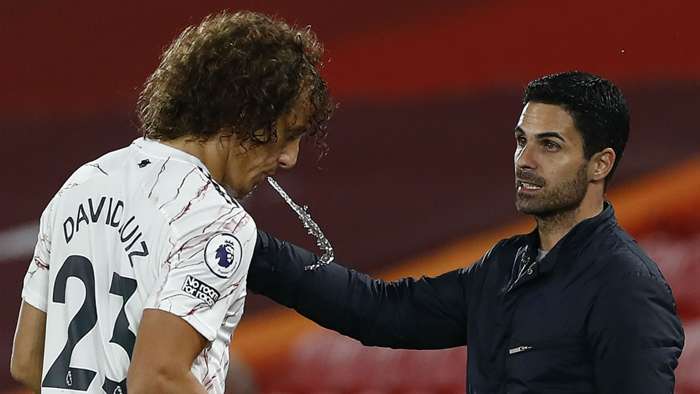 Arsenal’s insistence on trying to play out from the back has them “walking into the lion’s cage with a lorry load of steaks”, says Paul Merson, with Mikel Arteta urged to tinker with his approach.

Arteta, who once took the captain’s armband under thelegendary Frenchman, bought into that mindset as a creative midfielder in his playing days.

He has continued to favour that system as a coach, with his teeth cut alongside tiki-taka expert Pep Guardiola at Manchester City.

Arsenal are being asked to play in the same style, with their manager looking for them to work their way up the pitch with quick, incisive passing.

That can be a risky business, though, as the Gunners found out against high-pressing Liverpool in their last Premier League outing, and Merson feels it is too early in Arteta’s rebuild for those at Emirates Stadium to be going toe-to-toe with the best in the business.

“There is some improvement and on the other hand they are playing against the best team in the country and if not the best team in Europe after Bayern Munich,” former Arsenal star Merson told Sky Sports on the back of a 3-1 defeat to the defending Premier League champions at Anfield.

“When they go after, you just… it’s like going to Woburn zoo next week and walking into the lion’s cage with a lorry load of steaks. You’re going to get eaten alive aren’t you?

“If you stay in your car you are going to be alright and that’s what it was. They are playing that way away to Liverpool, they are the best in the business.

“If they are going to keep playing that way, there is only one result.”