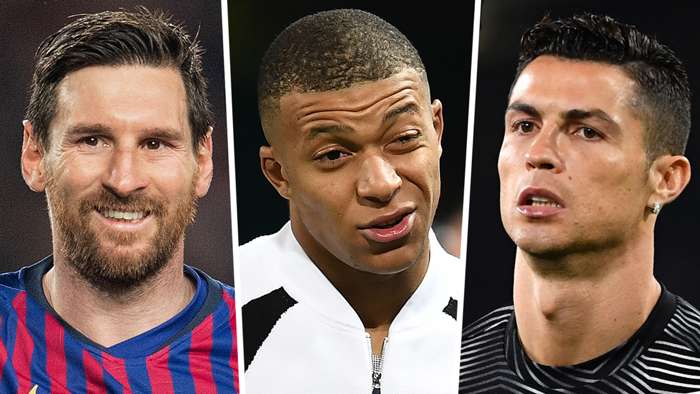 Antoine Griezmann was full of praise for Kylian Mbappe after the Paris Saint-Germain star torched Barcelona for a hat-trick on Tuesday, comparing him to icons Lionel Messi and Cristiano Ronaldo

With his three goals, Mbappe becameonly the third player to score a Champions League hat-trick against Barcelona, joining Faustino Asprilla for Newcastle and Andriy Shevchenko for Dynamo Kyiv.

"I am happy for him," Griezmann told RMC Sportof his international team-mate with France. "He has been criticised a lot, but that is what happens when you are someone for a little while.

"As soon as he plays less well, we criticise him. It is quite easy. But I believe that PSG have a future star, one who will be on the level of Leo and Cristiano. He had a truly great match."

Barcelona talliedthe first goal of the last-16 first leg, with Messi opening the scoring from the penalty spot.

From there, though, it was all Mbappe and PSG, with Barca completely unable to cope with the French star despite the absence of Neymar due to injury.

Mbappe routinely darted past the likes of Gerard Pique, Clement Lenglet and Sergino Dest, who were exposed by the Parisian star time and time again.

As a result, Barca will now face an uphill battle, having suffered another embarrassment in the knockout rounds of the Champions League in the wake of last season's 8-2 defeat at the hands of Bayern Munich.

Greizmann, though disappointed, said Barcelona intends on going for it in the second leg, which will be held at the Parc des Princes on March 10.

"We needed to have a perfect match. We didn't and they did. It’s a big defeat," Griezmann said after the match.

"We were ready, we wanted to play a big game but they were better than us, there is nothing to say.

"Kylian was having a great night. After this, there is a return match. We'll have to go there to win and turn the situation around. We're not going to go there as tourists."

PSG currently sit second in Ligue 1, one point behind league-leaders Lille through 25 games.

Mbappe, who has scored 21 goals in 29 games this season, will lead PSG into a clash with fourth-place Monaco on Saturday in a match that could help decide the Ligue 1 title.

Barcelona, meanwhile, are also chasing a domestic title, as Messi and Co. are eight points behind Atletico Madrid, who maintain a game in hand, ahead of this weekend's meeting with Cadiz.

Sad but unsurprising: Messi & Barcelona given a brutal reality check by Mbappe-inspired PSG