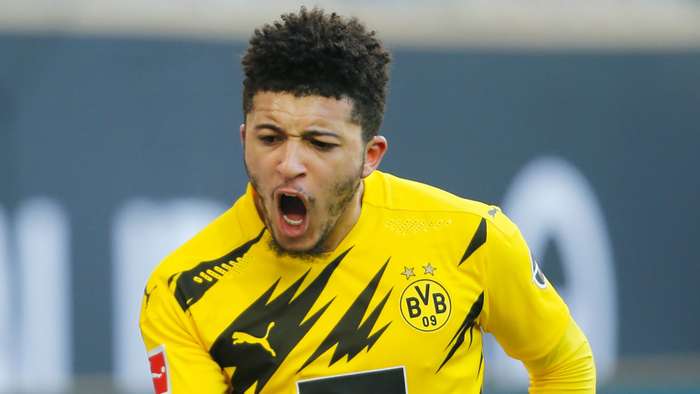 Jadon Sancho is impressing without the pressure of transfer talk weighing him down, according to Borussia Dortmund CEO Hans-Joachim Watzke.

The England international netted his 10th goal of the season in a 4-0 win at Schalke on Saturday, and alsoset up one of Erling Haaland's efforts, with Watzke glad to see him showing his "incredible quality again" after a testing period.

Watzke told Sport 1: "Jadon is doing really well at the moment, he's back. But that was only a matter of time. All the transfer talk in the summer has already been forgotten.

"Edin Terzic talked to him a lot. Jadon has shown again in the last few weeks what incredible quality he is. We are very happy that he is playing for us."

Sancho still has two years left to run on his current contract at Dortmund, and although speculation over his future has died down in recent months, rumours of a potential switch to Old Trafford continue to swirl in the background.

BVB's refusal to budge on their £100 million ($141m) valuation of the winger ultimately put off the Red Devils last year, but it has been reported that the German giants may drop their asking price when the market reopens amid the financial uncertainty caused by the coronavirus crisis.

Dortmund have slipped out of contention for the Bundesliga title after falling 15 points behind reigning champions Bayern Munich, but they are still going strong in the Champions League and DFB Pokal.

Terzic's side won the first leg of their round-of-16 European tie against Sevilla 3-2 last week, and also have a quarter-final clash against Borussia Monchengladbach to look forward to in the domestic cup.

Sancho and Co will also be determined to make sure that BVB secure a top-four finish in the German top flight, with a home fixture against Arminia up next on Saturday.

"Of course, qualifying for the Champions League is still realistic,"Watzke added. "That is our stated goal.There are six points for us to make upon Frankfurt and Wolfsburg.

"In the end, we have to leave one of those two teams behind.It is certainly good that we have still got to play both of those teams.So, for us, everything is still possible."