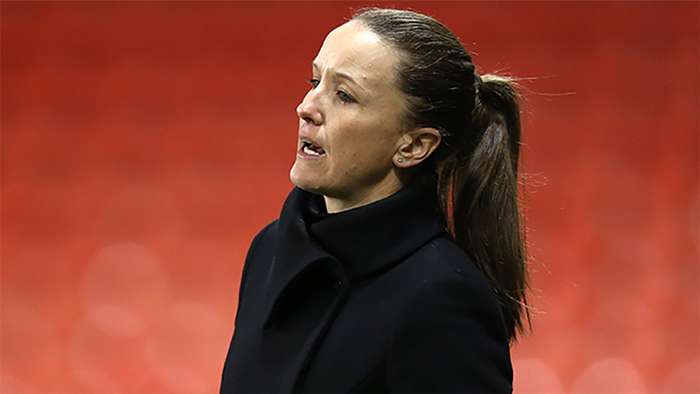 Casey Stoney has criticised the scheduling of games, claiming player welfare hasn’t been taken into consideration as Manchester United prepare for their third match in seven days.

But, with up to six players out injured, it’s set to be a testing week and Stoney is unhappy with how the schedule has fallen.

“I’m a little bit frustrated that we’re playing three-game weeks, we’ve just had three weeks off and we’re coming back into a season,” Stoney said.

“As much as you can give players individual programmes you cannot replicate the game and whatever you do you can’t replicate the amount of striking they do with a ball, the reactivity drills that we do, the unpredictability of the game you can’t train for, so we are going to pick up niggles.

"I’m fortunate, I can’t complain, I have a very capable squad. I look at other squads with less resources and think how are they going to cope this week.

"It’s just a lot of strain and I don’t think player welfare has been considered very well.”

Katie Zelem, who has been missing after a positive Covid-19 test, should be available but United are likely to be without Jess Sigsworth, Ona Batlle, Lauren James, Ivana Fuso, Lotta Okvist and Martha Harris as they recover from injuries, while new signings Christen Press and Tobin Heath still aren’t ready to start having only had two weeks of training.

United have been given an additional few hours' rest ahead of their league game on Saturday against Tottenham as the Liverpool clash is kicking off at the peculiar time of 2pm BST,another move Stoney isn’t convinced by.

“It wouldn’t happen in the men’s game,” Stoney said about the kick-off time. “I agreed to it but was very keen we wanted to get it on TV if it was going to be at that time, so our fans can have visibility.

"We’re not making the game as visible as it could and should be. We’re only allowed to show three games a season on MUTV, that for me is a nonsense when the game needs to be visible. The fans can’t get in the ground.