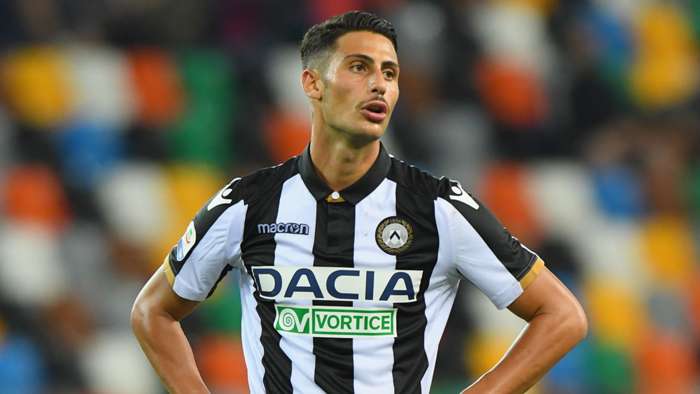 Juventus confirmed the signing of Rolando Mandragora for €10.7million (£10m/$13m), but the midfielder will remain at Udinese on loan.

The one-time Italy international left Juve on a permanent deal in 2018 and has since become a regular at Udinese.

But the Serie A champions confirmed the signing of Mandragora on Saturday, although the 23-year-old will stay in Udine.

The fee will be paid across two seasons, with Mandragora – who has signed a contract with Juve until 2025 – staying on loan at Udinese for 2020-21.

Udinese also hold an option to extend that loan through 2021-22.

While the loan is free, Juventus said Udinese may receive bonuses up to €6m (£5m/$7m).

Mandragora has been sidelined since June after suffering a knee injury, missing the run-in as Udinese eventually finished 13th.

Born in Naples, Mandragora began his senior career at Genoa, making his Serie A debut against Juve in 2014.

He impressed while on loan at Pescara in 2015-16 and signed for Juve the following summer, but made only one league appearnace before being sent on loan to Crotone and eventually sold to Udinese.

Mandragora represented Italy at five youth levels and was a regular for his country's under-21 side, but he is yet to add to his solitary senior cap. The midfielder made his bow for Roberto Mancini's side in a friendly defeat to France in the run-up to the 2018 World Cup.

Mandragora arrives as Juve's fourth major signing of the summer.

Arthur arrived in a big-money move from Barcelona early in the window, with Alvaro Morata signed from Atletico Madrid and Weston McKennie brought in from Schalke.

On Saturday, defender Daniele Rugani completed a loan move to Rennes , who are preparing for their debut season in the Champions League.

“I am happy to be in Rennes," Rugani said. "I discovered a beautiful environment. I can't wait to start playing with my new teammates and help them as best as possible to have a great season," Rugani said.