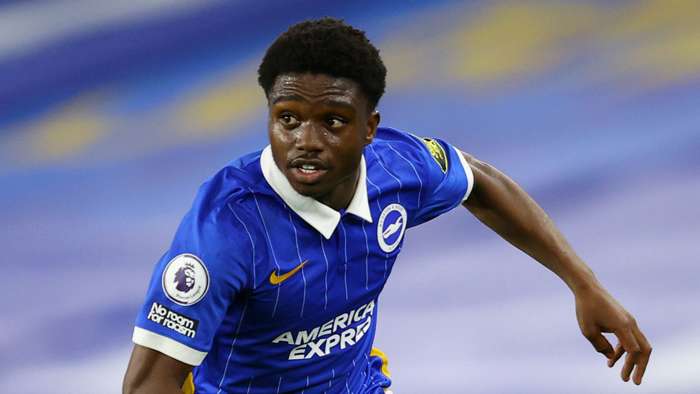 Frank Lampard made a mistake in allowing Tariq Lamptey to leave Chelsea for Brighton, says Alan Hudson, with the Blues boss told he got that transfer call “wrong”.

Lamptey progressed through those ranks to break into the first team set-up, but was given just one competitive outing before seeking minutes elsewhere.

Brighton were happy to buy into the 20-year-old’s potential and have offered him a Premier League stage on which to thrive.

The diminutive defender has been doing just that, with his pace and positioning allowing him to impact proceedings at both ends of the field.

Hudson believes those qualities should have been embraced in west London, despite Cesar Azpilicueta and Reece James already battling for a right-back berth, with Chelsea considered to have made a questionable decision that they may live to regret.

“I look at the young lad Lamptey they sold to Brighton, who has impressed me hugely,” Hudson toldCaughtOffside.

“I would have kept him as he is most definitely one for the future.

“He has been outstanding at Brighton since lockdown. He’s quick at turning defence into attack, which is something Chelsea lack – real pace with quality at the end of it.

“I think Frank Lampard got this one wrong.”

Lamptey pushed for the exits at Chelsea as the fierce competition he faced was always going to see his development stunted.

The Blues have continued to invest heavily in fresh faces since he departed, with Lampard overseeing an elaborate summer spending spree.

A new left-back formed part of that project, with Ben Chilwell lured away from Leicester in a £50 million ($65m) deal.

The England international arrived in new surroundings nursing a knock, preventing him from slotting straight into the fold.

He has, however, broken into the Blues side of late and netted on his Premier League debut as Crystal Palace were swept aside 4-0 last time out.

Hudson believes Chilwell can be a useful asset for Chelsea, but says he is not reading too much into an eye-catching outing against the Eagles which saw Roy Hodgson’s side offer little resistance.

The former midfielder said of another buccaneering full-back: “He settled in well enough but you cannot tell against such bad opposition.

“It’s much like saying the centre-backs look good when the opposition play with no attackers.