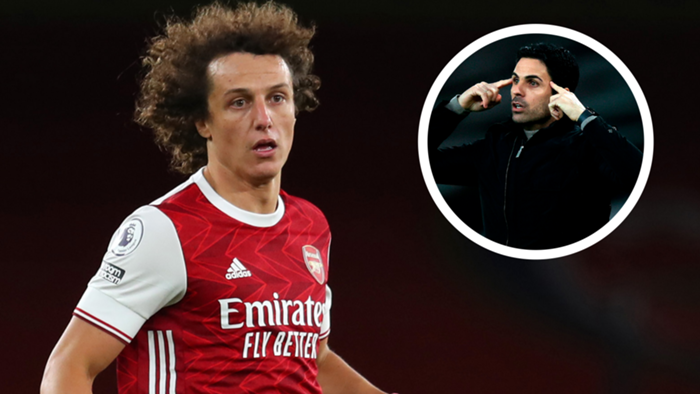 Mikel Arteta has hailed the influence of David Luiz, calling the Arsenal defender a ‘joy to work with’.

The 33-year-old Brazilian has formed an impressive partnership with Rob Holding in the heart of the Arsenal defence in recent weeks and has started each of the last four league games, helping the Gunners to three clean sheets.

And Arteta has paid tribute to the former Chelsea star for the way he continues to perform at the highest level.

“It’s credit to him because he trains really hard,” said the Arsenal manager.

“This season has been really tough in the beginning because he’s been through some injuries but he’s kept at it, he understood his role, he knows his role in the team, he’s one of our leaders and he’s so willing to keep improving.

“Even at this age he’s always looking at his games and his clips, all the time asking questions. When that happens you can still improve as a player and I think that’s why he’s performing the way he is at the moment.”

Arteta added: “David knows the things that he’s really good at and the things where there is still room for improvement.

“He’s a really honest man with himself. He’s won everything and it’s a joy to work with him.

“He showed his character first of all with the decision he made to join the club when he was with a club where he was winning trophies and he was still comfortable and under contract.

“He wanted a challenge and at that age it tells youeverything because normally at that age the challenge is not sporting but more a financial decision that you take to go to a different country.

“But David loves this game so much and he wants to keep playing at the highest level in a very competitive league. This is the challenge that he’s enjoying at the moment.”

Luiz is out of contract at the end of the season having agreed to a year-long extension last summer following his move from Chelsea in 2019.

Talks over extending his stay have yet to begin, but Arteta says his relationship with the defender means that there is no rush to enter into official negotiations and that his focus now should only be on ending the season as well as possible.

“No, there are still a few months to go on that,” said the Spaniard, when asked whether talks over a new contract had begun.“I talk to him all the time about this kind of thing so we’re in a good position.

“What I want is for him to keep performing like this to the end of the season.”

Luiz is a hugely popular member of the Arsenal squad, both with the senior stars andthe youngsters - many of which he has taken under his wing.

“He’s a great example for them,” said Arteta. “He’s got a good mixture with them between some banter and then some stick.

“They all listen to him because of who he is and what he’s done in the game. But also because how he behaves every day, how professional he is and how he goes about the job.