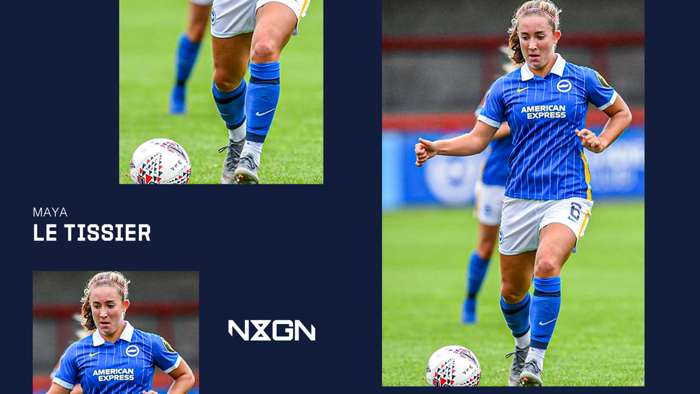 This summer, huge signings have grabbed all the headlines in the Women’s Super League, with World Cup winners and some of Europe’s hottest talent arriving in England's top-flight.

“I think there's always going to be competition, but when they come over, you just have to push to better than them,” said Brighton’s 18-year-old defender, Maya Le Tissier.

“If you want to be the best in the world, you have to be better than every single player that plays, no matter what league and what team is.”

The Guernsey-born starlet joined the Seagulls back in 2018 and has spent the last two years developing into one of the most talented players in England’s youth ranks.

Prior to that move, she was playing with the boys for St. Martins, something that her father, Darren, believes was particularly beneficial.

“A lady trying to make her way in the game with big strapping lads, you've got to use your technique, your brain, to work your way around the pitch,” he told the BBC after his daughter played her final game in the Channel Islands, ahead of the move to England.

“Hopefully I'll keep in the England ranks and just develop as a player,” Le Tissier added when asked about her ambitions for the move.

“My main aim in these next two years at Brighton is to play first-team football in the top-flight, even just to get on the bench or be involved with the squad, training with them regularly, will be my main aim for the next two years.”

Needless to say she hasdone more than that.

After making her senior debut before the end of 2018, the teenager played 12 of Brighton’s 16 WSL games last season and has now established herself as a regular starter.

Le Tissier has also continued to progress through the ranks for her country, making her first appearances for the Under-19s earlier this year.

“I always pick out the young ones as ones to watch but Maya, as an 18-year-old, I don't feel like I'm playing with a kid,” Brighton defender Victoria Williams said.

“I think she's kind of advanced beyond her years in terms of her positional awareness, and the professional attitude she has.

“I think Brighton are very fortunate to have her and I personally believe she has a very promising career ahead of her at club and England level.”

As a centre-back, Le Tissier is calm and composed both in possession and without the ball when faced with one-on-one situations, as she rarely divesin. In doing so she has helpedform a key part of the resolute defence that ex-England manager Hope Powell has created at Brighton.

This season though, her task is to master a new position at right-back, with new signing Rebekah Stott set to hold down the centre-back berth next to her.

“I told her over the summer she's going to be that position,” Powell explained. “Her athleticism, her levels of fitness, I think really suit that role. Also, she gives us that extra option as a centre half.”

The youngster will also learn a great deal having someone like Stott – who has over 70 caps for New Zealand and has played in Germany, Australia, Norway and the United States – next to her.

“She's played football all over the place so she's got so much experience and whenever she gives me some tips or gives me some advice, I always take it on board and try and implement into my game,” Le Tissier said of her new team-mate.

The 18-year-old has helped Brighton keep two clean sheets from their first threeleague games, starting the season with a 2-0 win over Birmingham, before taking an impressive point home from Manchester City.

On Sunday, aiming to bounce back from defeat to Manchester United, Brighton face another stern test when they come up against an Arsenalside who are the only team in the WSL right now who do notcurrently meet the homegrown criteria that will come in next year.

The Gunners possess a squad that isfull of attacking talent, led bylast season's top goal-scorer, Vivianne Miedema, who is one of the best players in the world.

But, as Le Tissier says, if you want to be the best, you have to play against the best. For all her footballing talent, it isan attitude like that which stands out in particular.