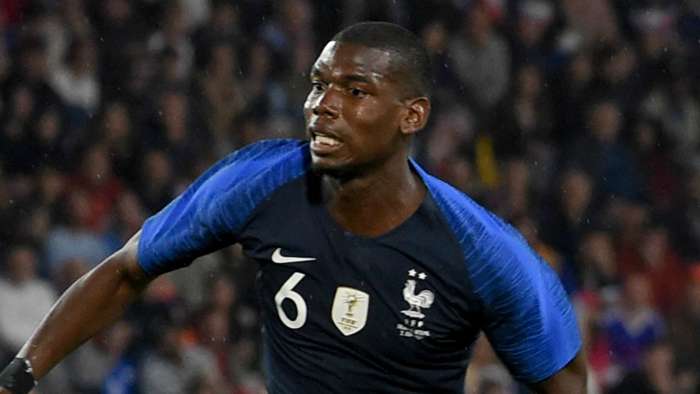 Paul Pogba has returned to the fold for France after being called up by manager Didier Deschamps for their upcoming trio of games in the October international break.

Pogba missed out on last month's internationals after testing positive for coronavirus, however he has made a full recovery and is available to play once again for the 2018 World Cup winners.

Also returning for Les Bleus are the Bayern Munich trio ofBenjamin Pavard, Kingsley Coman and Corentin Tolisso. They were rested for the September internationals following their involvement in the Bundesliga winners' run to the Champions League final, where they beat Paris Saint-Germain 1-0.

Among the notable names picked by Deschamps is Lyon midfielder Houssem Aouar, who is attracting serious transfer attention from Arsenal.

Aouar was called up for the last France squad after Pogba's withdrawal and would have made his senior international debut, however he then tested positive for Covid-19 himself and missed out. Deschamps has turned to the attacking midfielder again and he is set to win his maiden cap.

Aouar has been rewarded for his superb form in recent months, which helped Lyon reach the Champions League semi-finals and has put him on the radar of leading European clubs.

Eduardo Camavinga and Dayot Upamecano, who had been called up for the first time against Sweden and Croatia last month, are also back in the squad.

Rennes teenager Camavinga, who turned down a move to Real Madrid this summer, hugely impressed on his debut and will be one to watch again in the coming week of fixtures.

Among the most notable names to miss out are Real Madrid defender Ferland Mendy and Tottenham Hotspur midfielder Moussa Sissoko.