Ripping out Real Madrid's heart: Could Ramos and Varane both leave this summer?
Match

Ripping out Real Madrid's heart: Could Ramos and Varane both leave this summer? 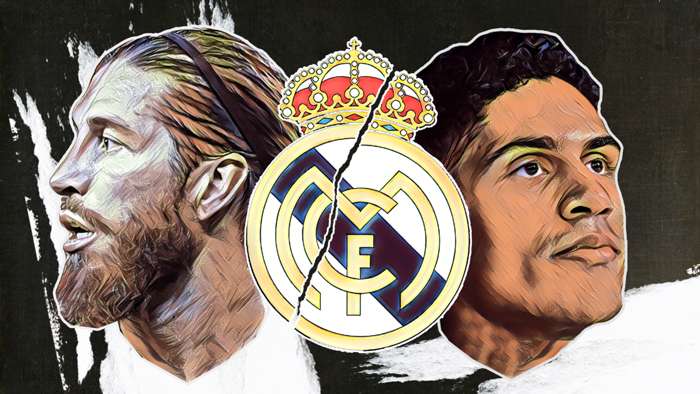 Sergio Ramos and Raphael Varane have been Real Madrid’s bedrock for years, lifting four Champions League titles together at the heart of the Blancos' defence.

But this summer, there is a real possibility that both could walk into the sunset and away fromSantiago Bernabeu.

Zinedine Zidane has relied on the duo since taking over in 2016, with only injury ever keeping them out of the side.

They are a complementary pairing, with Ramos’leadership and aggression offset by Varane’s capacity for recovery and immense speed.

Pepe, who is still putting in excellent performances for Porto at 38 years old, left the club in 2017, while€50-million (£43m/$57m)signing Eder Militao has barely featured, a testament to the partnership’s enduring quality.

However Ramos’contract expires this summer and he has not put pen to paper on a renewal, while Varane’s runs out in June 2022.

Madrid’s skipper is the more time-urgent situation and, having previously come close to leaving the Spanish capital, his time may have finally come to depart.

Ramos turns 35 at the end of March and could land a final big payday elsewhere; it is a purely financial issue stopping him from extending his deal with Madrid.

The club have made two offersof a two-year deal on around 75 per cent of his current wage, with the remaining quarter deducted because of financial problems caused by the coronavirus pandemic.

Ramos and his representatives, on the other hand, want the whole salary, payable over a longer period.

“I want to retire at Real Madrid, I’d play here for free,” he said in 2019, but now that seems mere posturing.

It followed an argument between Ramos and president Florentino Perez, with the Madrid chief claiming the defender tried to leave for free to a Chinese Super League club.

“There is a lot of uncertainty,” said Ramos last week. “I would like to be able to say something but there is nothing new.

"I’m only thinking about coming back from injury and to finish the season in the best possible way. There is nothing new about the renewal.”

It is easy to criticise Ramos for his greed, but the defender is entitled to his own valuation of his services, given his importance to the club in recent years.

He was vital as they ground their way to the Spanish title last season, scoring important goals in the run-in, while Zidane parachuted him straight back into the side after injury against Elche at the weekend.

The coach would dearly love to keep his captain at the club. “I want to be honest and I have to say I don't know what's going to happen with him,” explained Zidane.

"We want him to stay here. He's always going to be an important player and I want him to remain here.”

Despite Ramos being the more iconic defender, at 27his partner Varane’s future may be the more pivotal when it comes to the club’s medium-term success.

The Francecentre-back is at his peak and could slot in at virtually any other European clubwho want his services, with bigger pay packets likely on offer elsewhere - especially if he comes at a cut-price fee with only a year left on his contract.

Reports in Spain suggest Madrid are currently in talks with him over a new deal, but so far he has stalled on putting pen to paper.

As the situation drags on, Perez may be mulling over a different kind of renewal. The money saved on Ramos and Varane’s contracts, as well as a potential fee for the latter, would give Madrid the opportunity to make a marquee signing in the summer transfer window.

Generational talents like Borussia Dortmund's Erling Haaland and Paris Saint-Germain’s Kylian Mbappe would reinvigorate a flagging attack that isreliant on 33-year-old Karim Benzema, and would likely only be possible with more financial room for manoeuvre.

Losing Ramos and Varane would help Madrid loosen their belt a notch or two, economically speaking, particularly if they are thrifty in replacing them.

Bayern Munich’s David Alaba could arrive on a free transfer, with the Austriacentre-back keen on a switch to Spain when his contract expires in June.

Pep Guardiola was comfortable using Alaba in various positions and he has performed well for the Bavarians in the middle over the past year.

“He's outstanding for me as a left-back, but I think he's one of the best in the world at centre-back," said team-mate Joshua Kimmich.

Alaba can offer the same quality as Ramos on the ball, along with speed nearly matching that of Varane, while Sevilla’s Jules Kounde and Villarreal’s Pau Torres are other names linked with Los Blancos. Along with Militao and the ever-reliable Nacho Fernandez, Perez could shake things up.

Real Madrid have long been the side people look to for ‘Galacticos' and swashbuckling attacking talent, but since Cristiano Ronaldo left they have been reliant on their defence and struggled in front of goal.