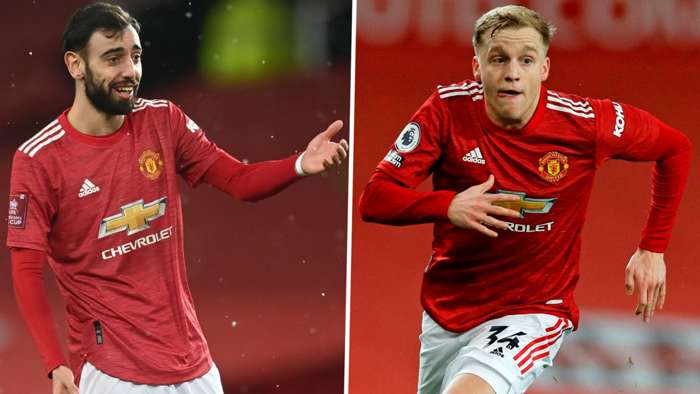 If there was any doubt over just how important Bruno Fernandes is to Ole Gunnar Solskjaer's side, it was made painfully obvious as the hosts struggled to break down opponents who put all 11men behind the ball.

Of course, United have had problems in the past with teams that sit in a low block and, as these two sides slogged it out in the snow, there was no impetus, no spark and no creativity. Basically, there was no Bruno.

Fernandes had been given a rest as Solskjaer rotated his players,making six changes from the 3-3 draw with Everton, but they missed the Portuguese, badly. The only surprising thing was that Solskjaer waited until the 73rd minute to bring him on.

And it came asno surprise at all to see the number 34 flash up on the substitutes' board. Donny van de Beek’s night was over.

Frustrating is probably the word that best sumsup the 23-year-old’s time at Old Trafford so far. It's been frustrating from his perspective, because he'll feel he's not been given as many chances as he would have expected.

But United are also entitled to feel frustrated, given Van de Beek hasn't made the most of the chances he has been afforded. Tuesday night has to go down as another missed opportunity.

Let’s get this right: nobody played particularly well atOld Trafford but all eyes were on Van de Beek. The Dutchman's arrival from Ajax generated a huge amount of excitement and expectation and his every move has been closelymonitored.

This time, he was tasked with being the creative hub behind the fast, fluid front three of Marcus Rashford, Mason Greenwood and Anthony Martial. It was a tough ask for Van de Beek, who excels more as a box-to-box midfielder than a No.10.

He was crying out for more creative support alongside him;instead, he was backed up by Fred and Nemanja Matic.

However, the harder he tried, and the longer the game wore on, the more his confidence appeared to drop. By the end, nothing was coming off for the Netherlands international.

He could be regularly seen pointing to the spaces where he wanted his team-mates to play the ball for him but when he made the run, the ball never arrived.

This was just Van de Beek's11th start since signing and he has been used as a defensive midfielder, a left winger, a central midfielder and a No.10 in that time, so there should be some level of sympathy for him that he is not being played consistently in his best position.

However, as he hooked a simple cross-field ball to Rashford out of play shortly before the hour mark, the question was when, and not if, he was going to be hooked.

By the time he was taken off,Van de Beek had managed just one shot, which was blocked, 45 touches and only 27 successful passes. Fernandes was only on the field for 47 minutes but he completed four more passes than the man he replaced (31).

By Fernandes’high standards, even he looked rusty. Maybe the Mancunian cold had got to his bones after more than an hour sittingon the bench but, despite a few wayward balls, it was again made abundantly clear that United are a far better outfit whe he is on the field.

He had only been on the pitch two minutes when he sparked at United attack down the right with a perfectly weighted pass with the outside of his boot to find Greenwood.

He wasn’t involved in the goal– McTominay smashed home from the edge of the area after a lovely lay-off from Rashford –buthis introduction was integral to United's improvement.