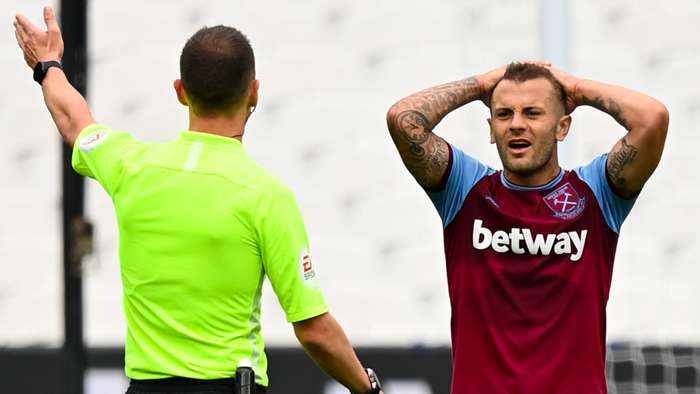 West Ham have released Jack Wilshere after coming to terms with the injury-hit midfielder to end his £100,000-a-week contract early, allowing him to become a free agent.

The midfielder's time at the Hammers has been beset by three significant injuries, two of which needed surgery, and he has played just 19 times since joining the club from Arsenal in an £18 million ($23m) move back in 2018.

It is unclear where Wilshere will move to next but he is currently fit and recently played in West Ham's 5-1 Carabao Cup win over Hull City in late September.

The Irons are currently struggling financially and it is hoped that releasing the midfielder can allow the east London club to do further business, with a centre-back being targeted.

Chelsea's Antonio Rudiger was on the agenda but he rejected a move to the London Stadium, while the West Ham are also considering a deadline day move for fellow Blues centre-half Fikayo Tomori.

Felipe Anderson looks set to ease the club's financial burden by making a loan move to Porto, with the Premier League side having had around £20m ($26m) to spend late on in the transfer window.

Premier League deals must be completed before the 11pm deadline on Monday, with a host of smaller deals set to go through in the final hours.

He should join the likes of Pablo Zabaleta, Jeremy Ngakia, Carlos Sanchez and Albian Ajeti, who have been shipped out to slim Moyes' squad.

Elsewhere, Josh Cullen was sold to Anderlecht for £1m, while Grady Diangana was sold to West Brom for £18m ($23m), prompting criticism from supporters and several first-team players.

However, retaining Declan Rice is considered a major victory by David Moyes and his coaching staff after they rebuffed Chelsea's approaches to sign their star midfielder.

Chelsea will retain a long-term interest in the England international following his development after releasing him from their academy as a 14 year old.

West Ham's only incoming deal this summer has been Vladimir Coufal in a £5.4m ($7m) from Slavia Prague. Also signing from Slavia, Tomas Soucek's initial loan move was made permanent for £15m ($19m).

The club sits in tenth place in the Premier League after back-to-back league victories over Leicester City and Wolves.

Moyes will pit his side against Tottenham, Manchester City and Liverpool in a tough return to action following the international break.