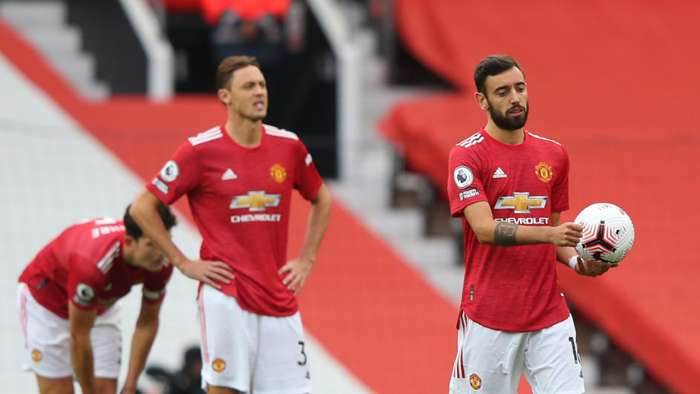 Despite an early Bruno Fernandes penalty handing the hosts the perfect start inside the first 120 seconds, the Red Devils subsequently saw the tables turned on them as former United supremo Jose Mourinho saw his Spurs side run rampant against a slipshod United defence.

Harry Maguire and Eric Bailly were frequently at fault around the back, with the former particularly responsible for the visitors' first goal as he opted to head a dangerous ball around his own box, before falling over team-mate Luke Shaw to allow Tanguy Ndombele to smash home from close-range.

Spurs doubled their haul in quick succession after Maguire brought down Harry Kane in midfield - and the England skipper outfoxed his international team-mate with a quick low free-kick into the space where he and Bailly should have been, allowing Son Heung-min to latch on and rifle home past David de Gea.

The South Korea international turned provider for Tottenham's third just beyond the half-hour mark, only moments after United were reduced to 10 men with Anthony Martial sent off for a nudge on Erik Lamela after the latter appeared to elbow him.

Son played his part in a fine one-two after Kane dislodged Nemanja Matic of possession around the United box, following De Gea and Bailly's decision to play out from the back, with the England man clipping it past the keeper.

And it was the former again who compounded United's misery by doubling his tally with a shot through De Gea's legs following a lovely ball from Serge Aurier.

The deficit represented the Red Devils' worst performance in the opening half of a match in the Premier League era - and raised serious questions about their squad's ability to challenge this term.

Social media didn't hold back at the horror-show on display either, with many weighing in on a historically bad day for United.