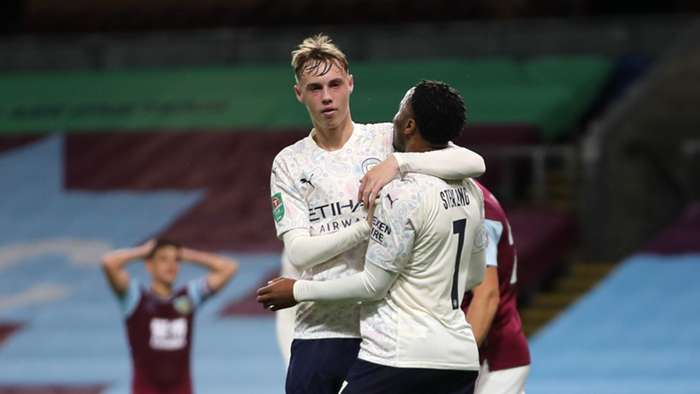 Pep Guardiola compared Manchester City's teenage midfielder Cole Palmer to Phil Foden after the 18-year-old made a strong debut in a 3-0 CarabaoCup win over Burnley.

A Raheem Sterling brace and Ferran Torres' first goal for the club put City into the quarter-finals of the competition they have won in three straight years, but Guardiola picked out Palmer for praise, comparing his finishing prowess to that of first-team regular Foden.

"He is an incredible young lad in the training sessions. Since two months ago he has showed us a lot of things. He has a good future in this club.

"He is a humble guy. He is a guy with incredible finishing, like Phil. He had his chance to score. His debut in this competition against a Premier League side, it will be good for his future.

"Again, thank you to the academy for these players. We get players from the academy's work."

Guardiola handed a second start to £20m (€22m/$25m) winger Torres at Turf Moor and the 20-year-old rewarded him with a well-taken goal.

The Spain international joined City from Valencia in August and has since featured twice in the Premier League.

Guardiola praised his performance at Burnley while offering constructive criticism, saying: "He is a young player and still needs a little bit of time to understand what we want to do.

"He's clever in the final third, with his passes. He doesn't cross to cross, he passes the ball."

On City's overall performance, which came after a 5-2 home defeat to Leicester City on Sunday, Guardiola said: "It was good. This competition is special for us.

"Two games, this one and Leeds before the international break. After our result against Leicesterit was important to win."