‘Arsenal players have to do homework under Arteta!’ – Aubameyang backing Gunners boss to bring good times back
Match

‘Arsenal players have to do homework under Arteta!’ – Aubameyang backing Gunners boss to bring good times back 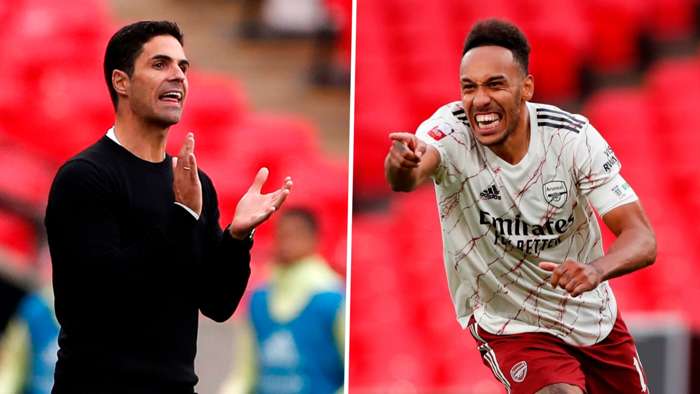 Mikel Arteta sets his Arsenal players “homework”, Pierre-Emerick Aubameyang has revealed, with the Spaniard being tipped to take thenorth London giant “back to where it belongs”.

Unai Emery had been relieved of his duties after failing to make the desired impact after stepping into the shoes of iconic predecessor Arsene Wenger.

Having found little value in experience, Arsenal decided to turn to a Premier League rookie in their next appointment.

Former club captain Arteta, who had been cutting his coaching teeth alongside Pep Guardiola at Manchester City, returned to Emirates Stadium and was charged with the task of recapturing former glories.

He has overseen FA Cup and Community Shield triumphs, with his methods earning plenty of praise from those working with him and interested observers watching on from afar.

Aubameyang, who has been convinced to sign a new contract amid the renewed optimism at Arsenal, told BBC Sport of the progress being made under Arteta: “He brings that atmosphere that everyone feels like being at home. We have to do homework as well!

“I think the mentality around the club is going very, very well and everyone is going on the same way. That’s really important. The goal is to bring the club back to where it belongs.”

Silverware has formed an important part of that process, with the Gunners getting a taste for the high life again.

Aubameyang has been the man to lift two trophies, although he fluffed his lines somewhat when dropping part of the FA Cup on the back of an impressive 2-1 victory over Chelsea at Wembley.

“I didn’t know!” he said when asked how he managed to let a famous prize slip through his grasp.

“I remember one guy was at my back, a guy from the FA, and he was wearing a mask so I asked him: ‘Should I take everything?’ He said ‘no, just leave the base’ and I understood ‘take the base’.

“I took everything and was like ‘it’s heavy, so heavy!’”