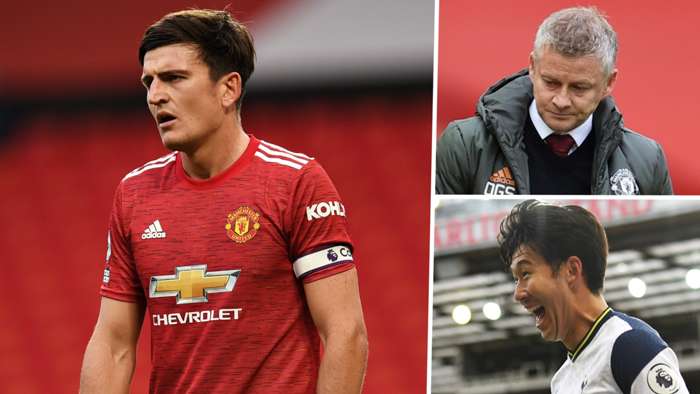 With no fans in the stands at Old Trafford, the television commentators can be heard clearly inside the Theatre of Dreams right now.

WhileUnited were being mauled by former manager Jose Mourinho and his ever-improving Spurs team,the Red Devils'latest new addition was landing in Manchester.

Edinson Cavani, who is set to arrive as a free agent after a surprise agreement was reached with the ex-Paris Saint-Germain star, has made his way to the club’s Carrington training base to undergo a medical before becomingUnited's second signing of the summer.

It is to be hoped the Uruguay internationalhasnot been paying any attention to the goings on at Old Trafford so far this campaign, with the 6-1 defeat here only confirming what many have been fearing when watching Ole Gunnar Solskjaer's team this season.

While the club are attemptingto get fans excited about Cavani'sarrival, the problem is that unless the 33-year-old can suddenly play at centre-back then it is going to do little to improve United’s performances.

Their display against Tottenhamwas as bad as it has got in recent times;a shambolic effortthat cannot be blamed on a soft red card that was handed to Anthony Martial for a slap on Eric Lamela in the 27th minute.

United were already 2-1 down by that pointthanks to goals from Son Heung-min and Tanguy Ndombele followinga stream of comedic defending from Solskjaer’s side.

For all the emphasis and effort that has gone into trying to secure a right-sided attacker before Monday’s deadline, the real problems in this teamlie in its defence.

On their day, United'sfront three of Martial, Marcus Rashford and Mason Greenwood are up thereamongthe best attacking threats in the world, and the potential arrival ofJadon Sancho would have only enhanced that belief.

But that could come to mean nothing when their defence, in itscurrent form, would notlook amiss in a side that isfighting a relegation battle.

United have nowconceded 11 goals in their opening three league matches for only the second time in their history - they conceded 13 in 1930 -31 and went on to be relegated.

And while they arefar fromrelegation fodder this time around,they can kiss goodbye any chance of competing for the title after two defeats from their opening three matches.

WithVictor Lindelof having faced criticism throughout the opening weeks of the campaign,Solskjaer finally relented against Spursand started Eric Bailly alongside Harry Maguire.

But, after United had taken the lead inside two minutes through a Bruno Fernandes penalty, both members of the new-look centre-back pairing were at fault for Ndombele's equaliser, with Bailly and Maguire both heading the ball up in the air before the latter clashed with Luke Shaw to allow the Spurs midfielder to fire home.

Bailly was then caughtout by a quickly-taken Harry Kane free-kickwhich allowed Son to make it 2-1 three minutes later.

These were notisolated incidents, with United's defence all over the place every time the visitors launched attacks. Things only got worse after Martial was sent off,but the signs were there that a thrashing was on the cards long before the France international received his marching orders.

The alarming problem for Solskjaer is that this performance was nota one off. It was nota lapse in concentration and a bad day at the office like when Manchester City won by the same scoreline here in 2011.

This was a continuation of a theme that has been plaguing United for some time. Their defence, despite spending £80 million ($97m) to bring in Maguire in the summer of 2019, has continued to lookunconvincing.

Bailly was at fault for Spurs'third as hisdreadful pass on the edge of the area was leapt upon byKane, and not even the extra man United were missing would have helped to compensate for the way the visitors cut them open with ease.

Fred and Scott McTominay were brought on at half-timeto offer more security to United’s leaky backline. but even that could nothelp stop as a superb through-ballfrom Pierre Emile Hjoberg from finding Serge Aurier for Spurs’ fifth of the evening.

A ludicrous sliding tackle from Paul Pogba, who had another poor game, ensured Kane got on the scoresheet as he netted Tottenham'ssixth from the penalty spot. Meanwhile in the stands,Woodward could be seen checking his phone asthe embarrassment continued.

In just 16 days' time United will take on a PSG attack that is likely to boast Neymar and Kylian Mbappe, among others. It does not bear thinking about the carnage that could ensue if Woodward does not deliver a new centre-back in the next 24 hours.

That, however, does not seem likely. Cavani and new left-back Alex Telles, for whom a deal has been agreed with Porto, will arrive, but a central defender is not a priority for the 20-time English champions.