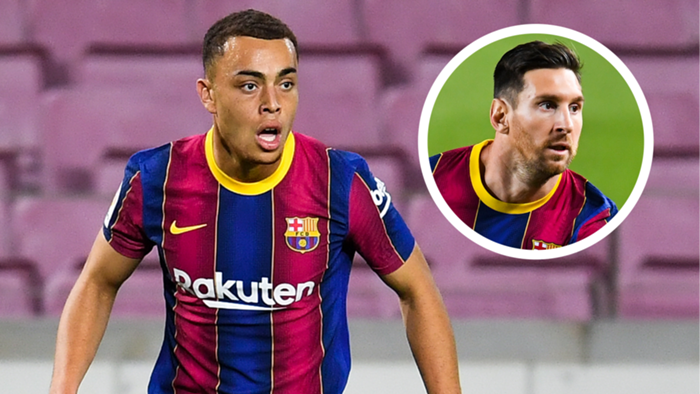 Sergino Dest admitted he didn't understand a single instruction from Lionel Messi during his Barcelona debut on Sunday, although the U.S. men's national team star believes he's off to a good start with his new teammate.

De la Fuente was also named to the bench on Sunday, but it was Dest who made his debut, becoming the first American to ever appear for Barca in an official match.

And, after the game, Dest admitted that it was special to play alongside Messi, even if the two still have some communication issues to work out.

"Today I saw everyone, Messi too," Dest told Dutch outlet NOS. "Messi doesn't speak English, but it was very special to meet him.

"If I'm honest, I don't know what he told me, but we were both smiling, so everything must be fine, right?"

Dest turned down Bayern Munich to make his move to the Camp Nou , having emerged last season during his breakout campaign with Ajax.

The 19-year-old defender made 35 appearances across all competitions while also earning three caps for the USMNT, confirming his allegiance to the U.S. by turning down overtures from the Netherlands.

Coincidentally, Dest is now managed by Ronald Koeman, who was in charge of the Netherlands team he rejected.

Koeman was one piece of convincing Dest to choose Barca, as was Messi and another former Barca star: Ronaldinho.

"I chose Barcelona because I have always dreamed of playing for Barca," he said.

"Ronaldinho is my idol and a legend at this club.When I found out about Barca's interest, I didn't have to think twice."