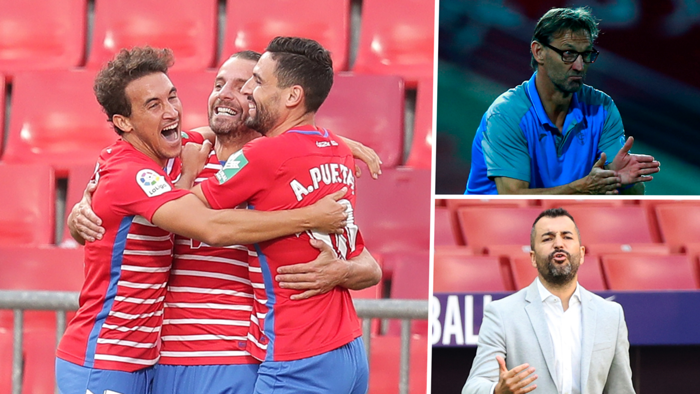 From the biggest leagues in Europe, there is a regular cast of qualifiers for European competition. In Spain’s case, you will always see Barcelona and Real Madrid, usually accompanied by Atletico Madrid, Sevilla, Valencia, Villarreal, and so on.

Granada have reached the Europa League group stage, having entered at the second qualifying round. They beat Teuta of Albania 4-0 away, Locomotive Tbilisi 2-0 at home, then travelled to European regulars Malmo, who reached the round of 32 last year – and picked up an impressive 3-1 victory in Sweden to qualify for the group stage.

A good achievement for any club, especially one making their European debut – but especially for a team put together on a shoestring budget, who less than four years ago were the laughing stock of the Spanish game.

La Liga regulars throughout the 1960s and 70s, Granada endured a fall all the way down to the fourth tier of Spanish football between 2002 and 2006, before returning to the top-flight in 2011 after successive promotions.

In 2009, they were taken over by the Pozzo family, owners of Udinese who would go on to purchase Watford and take them back to the Premier League. A player sharing agreement between the clubs helped Granada survive in La Liga for six seasons, never finishing above 15th place, before the Pozzos sold to Jiang Lizhang in July 2016.

2016-17 was one of the most disastrous seasons in Granada’s history. Having had to sign 17 players before the season began due to losing the Pozzo loan connections, the club went through four managers, and finished rock bottom of La Liga with a meagre 20 points, four wins from 38 matches.

The last of those managers was former Arsenal and England captain Tony Adams. Adams had not coached in nearly five years, with his most recent stint being a year in charge of Azerbaijani team Gabala. His only elite level coaching role was 16 games with then-Premier League side Portsmouth in 2008-09, where the club earned only 10 league points during his tenure.

Granada, who still had hopes of staying up when Adams arrived, lost all seven games under him, and the Englishman was sacked at the end of the campaign.

Off-field, things were worse. The photo most widely circulated of Adams after his appointment showed him next to the Liga logo wearing a natty three-piece green checked suit and open neck black shirt.

His introduction press conference claim that he would give the players “a kick up the a*se” was greeted in Spain with confusion, as some took it to mean literal assault. He claimed the squad lacked intensity, for which his solution was to take English free agents Kieran Richardson and Nigel Reo-Coker on trial. Neither played a competitive game for Granada.

The most infamous moment came during an early training session, where he enthusiastically tried to demonstrate defensive technique via mime to his multinational squad of players.

The moves – which saw Adams waving and pushing his arms, running back and forth and side to side, before stopping and imitating a dodo trying to fly – went viral, and were even sent up by Adams himself in a recent lockdown dance video with his family.

The only way was up for Granada. After another chaotic four-manager season in the Segunda Division where they came 10th, former Sevilla youth coach Diego Martinez was placed in charge.

Martinez guided them to promotion as runners-up in 2018-19, and set about preparing for a season which would end in their highest league finish since 1974 and a first-ever European qualification.

Martinez pieced together a squad on a shoestring budget – the most expensive of 16 signings during 2019-20 was Darwin Machis from Udinese for €3 million (£2.7m/$3.5m).

The most eye-catching acquisition however was former Spain international, Real Madrid striker and Tottenham flop Roberto Soldado, at age 34 returning to his homeland from Fenerbahce on a free.

Soldado’s reputation took a nosedive amid his struggles in London, but he found the goal-scoring knack again in Turkey and is relishing his role as spearhead and focal point for the underdog, where his high effort, all energy style fits their status.

Under Martinez, Granada have become a much tougher nut to crack – a defensively focused, counterattacking side with a penchant for grinding out wins.

Nine of their 16 Liga wins were by a one-goal margin, although there were a few outliers – not least a 4-4 draw at Valencia to open the season, and a 4-0 victory over Athletic Bilbao to snatch seventh spot after Getafe imploded.

Granada’s start to the 2019-20 season really caught the eye, not least a stunning 2-0 victory over champions Barcelona in the fifth league game, a result which could be said to have started the downward trajectory from which the Camp Nou club are yet to fully recover.

Second after six wins from their first 10 games, teams looked to have worked the new boys out as they then won just three of their next 13 in the league. However, a strong return to form after the coronavirus-enforced lockdown, including four wins in their final six matches, allowed Granada to pip bigger names like Valencia and Athletic for a place in European competition.

This season could be trickier for Granada – last season’s top scorer, loanee Carlos Fernandez, has returned to Sevilla, although they have broken their transfer record with the€11m (£10m/$13m) acquisition of Colombian striker Luis Suarez from Watford.

However, they started the Liga season with back to back wins before running foul of a UruguayanLuis Suarez-inspired Atletico Madrid, losing 6-1.