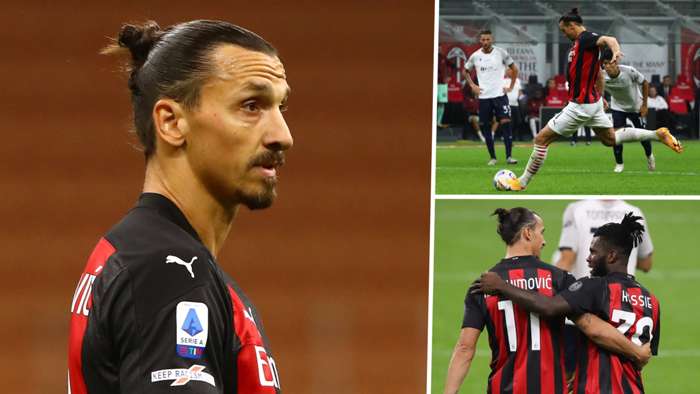 Zlatan Ibrahimovic is not celebrating his 39th birthday the way he would have liked.

"Covid had the courage to challenge me," he wrote on Twitter. "Bad idea."

Some footballfollowers have long since tired of Ibrahimovic's hyperbolic public persona, which usually involves referring to himself in the third person and making tongue-in-cheek boasts about his Chuck Norris-like shows of super-human strength.

However, "Zlatan's act" is precisely that – an act, a knowing parody of the conceited character he has created.

Even his own autobiography was a tall tale; an exaggerated version of the life and times of Zlatan Ibrahimovic which delighted his many fans.

David Lagercrantz simply gave the people what they wanted: tales of outrageous arrogance told in Zlatan's voice, "the literary Ibrahimovic", as the ghostwriter put it.

The irony is, of course, that at this stage there is no need for embellishment, no need for Ibrahimovic to make bold claims about his feats or fortitude.

His story is already incredible, and its final chapter proving is proving one of its most compelling yet.

As he enters his 40th year, Ibrahimovic is still performing at a ridiculously high level in Serie A.

Just before he was sidelined by Covid-19, Ibrahimovic had scored both goals as Milan kicked off their 2020-21 campaign with a 2-0 win over Bologna at San Siro.

"But I'm like Benjamin Button: I was born old and I die young."

It isnot just that he's still in great shape– Stefano Piolirecently admitted to having been "amazed" by the forward's physical condition before the start of the season – there isalso the fact that he suffered serious ligament damage in his knee while playing for Manchester United in April 2017.

His time at the top looked over at that point and a move to MLS seemed perfectly logical.

Even when Ibrahimovic was linked with a return to Europe last year, it seemed far more likely that he would join Swedish outfit Hammarby – a club in which he ownsshares – than continue his career in one of 'Big Five' leagues.

However, cash-strapped Milan needed a low-cost option up front and sporting director Paolo Maldini took a punt on Ibrahimovic, who arrived during the winter transfer window.

The gamble has paid off spectacularly.

In 18 appearances during the second half of last season, Ibrahimovic was involved in 15 goals, scoring 10 himself and creating a further five.

Just to put that in context, Juventus forward Paulo Dybala, who was named Serie A's MVP, scored 11 goals and racked up sixassists over the course of the entire 2019-20 campaign.

So, when Ibrahimovic claimed after a 4-2 win over the Bianconeri in July that had he arrived at the start of the season, Milan would have won the league - he had a bit of a point.

The Swede had a transformative effect on the entire club.

Certainly, there were other factors in Milan's remarkable resurgence after a disastrous start to last season –Pioli succeeding Marco Giampaolo as coach last October, the addition of Simon Kjaer during the winter window, the redeployment of Hakan Calhanoglu as a No.10.

However, Ibrahimovic's return was pivotal.

He not only provided Milan with a much-needed focal point in attack, he also arrived with a winning mentality, becoming a point of reference off the field as well as on it.

"He talks a lot in training and in matches," winger Samu Castillejo told DAZN. "He’s a champion and always wants to win, in training too.

"He pushes you and you can't make a mistake. If you miss a pass, a dribble or a cross, you find Ibra in front of you.

"You play with that pressure that is typical when you play with a champion who pushes you to bring the best out of yourself."

He hasnot just been pushing his team-mates either; there has also been constant encouragement.

"He always asks me to play freely, not to think too much and always to be 100 per cent focused," the revitalised Calhanoglu told DAZN.

"He also always tells me that my body is my capital. He passes on his experience to me."

And this is another reason why Zlatan's act should be regarded as little more than a sideshow.

Ibrahimovic may have a colossal ego, he may be portrayed as the ultimate individualist but, in reality, he is the consummate team player.

As he has grown older andmatured, he has become an excellent and selfless link man, a centre-forward nearly as likely to create a goal as score one. He has long since accepted that he can no longer take on entire defences on his own.

What ismore, behind the bravado is a decent human being.

When Sweden international Dejan Kulusevski joined Juventus during the summer, he received a congratulatory call from Ibrahimovic.

"When I was little, I never thought Zlatan would call me!" the attacking midfielder admitted at a press conference.

"We talked and it was so exciting for me. Zlatan was my idol. He opened doors in Sweden that no one had ever opened."

During Milan's Europa League qualifier with Shamrock Rovers in Dublin last month, Ibrahimovic noticed the home side's forward, Alan Greene, looking behind the goal while they were lining up for a corner.

"Zlatan, in his big, deep voice, said 'What are you looking at?'" Greene told the Irish Mirror. "I said 'My son is a ballboy.'

"He said, 'Zlatan will give you his shirt and make your son very happy.'

"He's a legend for doing that. My son was the happiest man in his school this morning; he skipped the whole way in!"

Ibrahimovic is having a similarly positive affect on the newest members of what is now the youngest squad in Serie A, with 20-year-old midfielder Sandro Tonali admitting shortly after joining Milan last month, "He's a man to be taken as an example."

Even now, Ralf Rangnick, who was meant to succeed Pioli as Milan coach, believes that the club erred in signing Ibrahimovicas it went against their stated intention to rejuvenate the squad.

However, what the veteran attacker has underlined over these past nine months is the importance of experience in football.

As Calhanoglu told Milan's TV channel, "We now have one leader on the bench, Pioli, and another on the pitch, Zlatan."

Whatever one thinks of Zlatan's act, Ibrahimovic's impact at Milan demands respect.