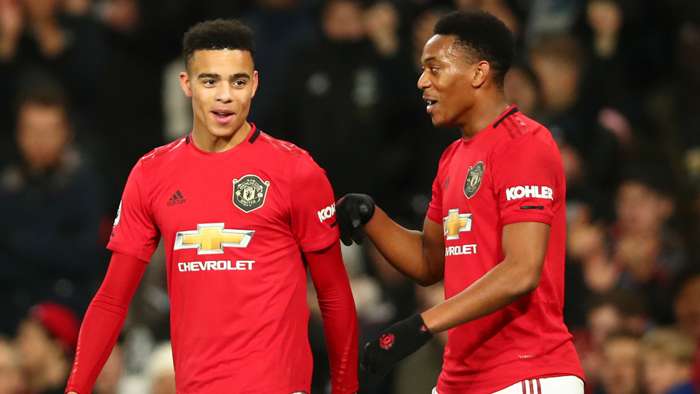 Romelu Lukaku has warned Manchester United against signing a new striker due to the dressing room "chemistry" between Anthony Martial, Mason Greenwood and their team-mates.

A long-winded pursuit of Borussia Dortmund's Jadon Sancho has been well-documented, while the likes of Alex Telles, Ousmane Dembele, Saul Niguez and Dayot Upamecano have also been mooted as potential targets for the Red Devils.

It has been suggested that Ole Gunnar Solskjaer is on the lookout for another No.9 too, with former Paris Saint-Germain star Edinson Cavani and Real Madrid's Luka Jovic both reportedly under consideration ahead of Monday's transfer deadline.

United were even credited with an interest in Tottenham captain Harry Kane earlier in the year, despite the prolific post-lockdown form of Martial and Greenwood.

Martial recorded a career-high total of 23 goals across all competitions in 2019-20, while Greenwood hit 17 during an impressive breakthrough campaign at the Theatre of Dreams.

Lukaku, who now plies his trade in Italy with Inter, has backed his old team-mates to continue delivering the goods in the final third over the course of the new season, while urging Solskjaer to refrain from adding another forward to his ranks given the harmony within the squad at the moment.

"If you buy another striker, what are you going to do with Anthony?" the ex-Red Devils frontman told The Times. "He's not being the No.9 at a great club.

"Give him the full season to confirm what he did last year instead of bringing in someone big to disrupt the chemistry in the dressing room.

"Then you have Mason's transition that is going to happen any time soon from right-wing to No 9, and Mason is a killer. I've seen him first hand. He's got something."

Greenwood and Martial will both be in line to feature again for United when they play host to Tottenham at Old Trafford on Sunday.