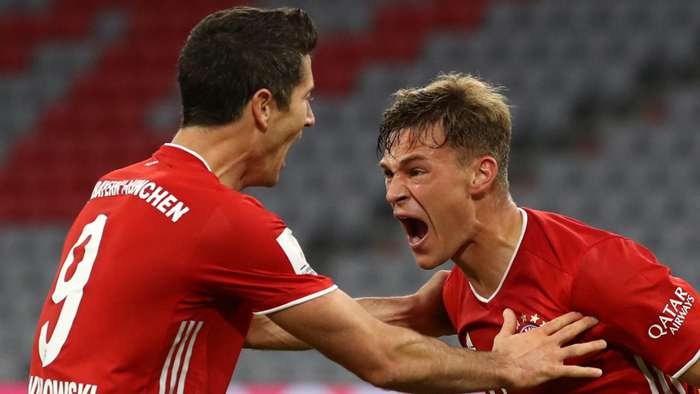 With 82 minutes on the clock, Kimmich gave his side the win with a goal that nearly defied belief.

The Germany international saw his original shot saved by Roman Burki and, after he fell on his stomach and the rebound rolled to him, he managed to chipthe ball up and over Dortmund's goalkeeper to score the winner.

The goal sealed Bayern's fifth trophy of 2020 and second in the span of a week after they also defeated Sevilla in extra-timelast week to clinch the UEFA Super Cup.

Speaking after the game, Bayern goalkeeper Neuerwas profuse in his praise of histeam-mate's strike.

"That was will and talent at the same time," Neuer said. "He did not stay on the ground and still chips the ball in.He's just a good player."

Bayern head coach Hansi Flick concurred with his goalkeeper on Kimmich, tellingZDF:“As long as I've known him, his mentality has been very special.He is well on his way to being one of those players who shapes this team and this club.

"I always look, when can I give him a break?But then you have to reckon with his anger, he always wants to be on the pitch."

Meanwhile, Haaland expressed his disappointment at the result and also at failing to add another goal to his tally on the evening.

"It hurts that we lost," the striker said."We could have won the game, it's a bad feeling because we were close.I should have scored another goal."

Haaland's team-mate Julian Brandt was also dismayed not to come away with a trophy, though he did find some positives to take out of his side's display.