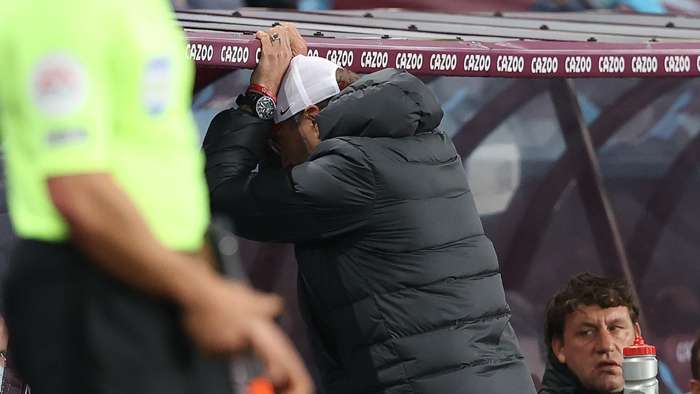 Liverpool have been left with more than just red faces after their shock 7-2 rout at the hands of Aston Villa, as Jurgen Klopp's side notched up a clutch of unwanted records for both the club and the Premier League in the process.

Though Mohamed Salah struck either side of the break, the Reds were unable to turn their vastly superior possession into an advantage, with their hosts mustering just 30 per cent of the ball throughout and registering less than half the number of passes.

On a day where old rivals Manchester United capitulated in just as extraordinary circumstances against Tottenham Hotspur , Liverpool were forced to watch as their aura of near-invincibility which served them so well last term was shattered by a rampant Villans team.

Perhaps the most ignominious stat to arise from defeat was that they became the first incumbent titleholder in the English top-flight to ship more than half-a-dozen goals at the back for almost 70 years, with Arsenal the last side to do so in September 1953, when they lost 7-1 to Sunderland - thereby making it the heaviest defeat by a current Premier League champion to date.

It also represented the first time that Liverpool had conceded seven goals in a game since April 1963, when Bill Shankly's side were drubbed by Spurs on their way to an eighth-place finish in the old First Division.

In terms of more recent history, the defeat also marked the worst result of Klopp's tenure at the helm - and arguably displaces the club's 6-1 loss to Stoke City in 2015 under Brendan Rodgers as their worst of the modern era.