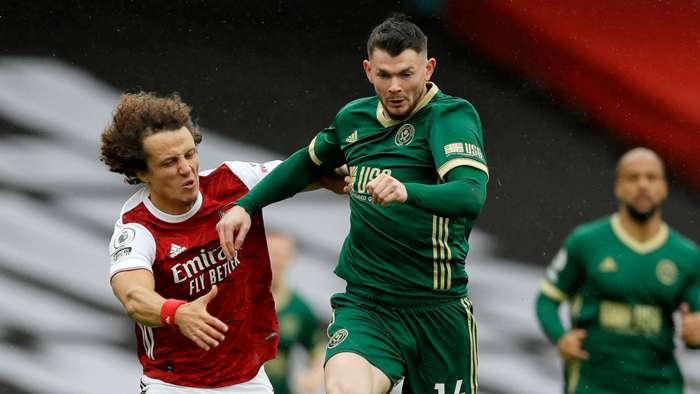 Chris Wilder accused referee Lee Mason of showing a lack of courage by not sending David Luiz off for a professional foul in Sheffield United's 2-1 defeat at Arsenal.

Arsenal's defender was not punished for the incident and the Gunners went on to secure three points courtesy of two goals in the space of three second-half minutes fromBukayo Saka and substitute Nicolas Pepe.

David McGoldrick scored United's first top-flight goal of the season to set up a tense finale, but they were unable to prevent a fourth defeat out of four.

Blades boss Wilder was baffled to seeDavid Luiz escape punishment just a couple ofweeks after his defender John Egan was dismissed for grappling with Ollie Watkins in a defeat at Aston Villa.

Asked to compare the two incidents, Wilder replied: "It makes no odds what happened to John Egan because that was a mistake. Mike Riley referees' boss admitted that to me, and the Sander Berge one last week was a mistake too. There was another one today.

"The referee has got to show courage. There are five officials now, I see it and all our staff and subs see it and five people don't. He's pulled his shirt. I'm not clutching at straws or grasping, Oli's shirt has clearly moved.

"With John Egan, the decision was made there. He didn't go over to look at the screen, and I don't understand why. I'm going to be annoyed and frustrated.

"We're looking for small margins that might help us. I think Luiz should get sent off and I think it's clearer than John's at Villa. When it's not going your way, you look for something to go your way."