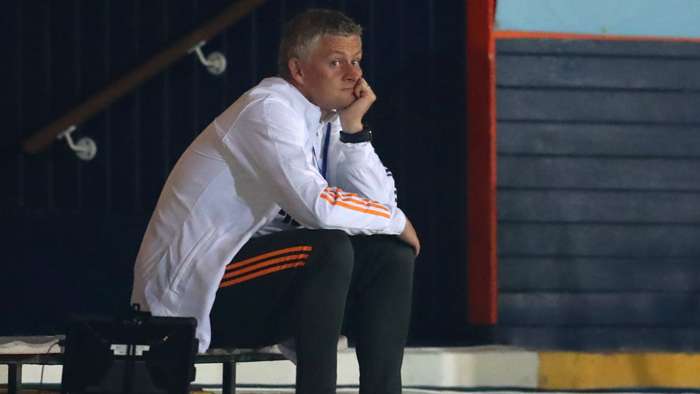 Ole Gunnar Solskjaer has backtracked on comments he made about the strength of depth inhis Manchester United squad as the transfer deadline edges closer.

However, with four days left until the deadline and with only midfielderDonny van de Beek through the door, the Norwegian has rowed back on his August commentssaying his fringe players have improved at the start of this campaign.

"When I talk about the squad depth, we’ve got a big squad," Solskjaer said ahead of United's clash against Tottenham in the Premier League.

"Of course the performances last season didn't warrant me giving too many of them more options because I think the 11, 12, 13 players who played and played well really deserved to play more and that means when you don’t want play you don’t get that fitness and sharpness that you need to knock on the door to get into the team.

"I think it's a different scenario now. After two games already I’ve seen many of the players who didn’t play too much last season performing really well."

The United manager also admitted he was wrong to use the word exploit in an interview in April when talking about potential deals the club could do off the back of the pandemic.

"I think my wording in lockdown, 'exploit', was a bad word by me. I didn't mean it in that respect," he explained.

"I meant there might clubs and players out there who have to move because of the situation and it might be something interesting. At the moment we've not had the - what's the word - there's not been those situations. We've lost loads of money, as the other clubs have as well."

The club are continuing to work on deals and there is hope that at least one new signing can be brought in before Monday’s international deadline, but Solskjaer would not be pushed on who, if anyone, would be arriving.

“Well, I'm not going to go into the transfer window now,” he said. “Of course all my focus is on Sunday's game, the club's always working hard to have as strong as possible a squad and if something happens in or out you'll get to know.”