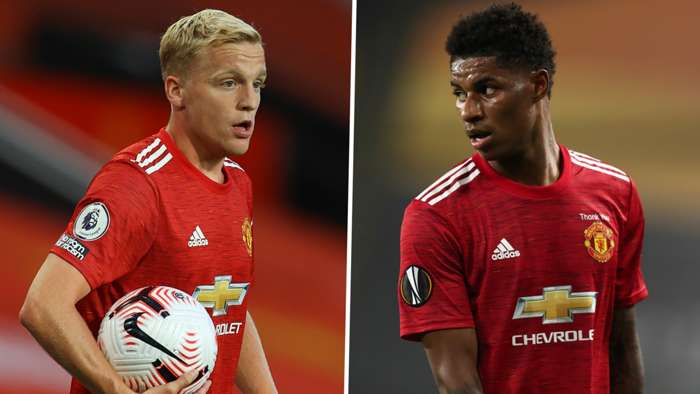 Ole Gunnar Solskjaer has suggested that he could look at using Donny van de Beek as alternative to Marcus Rashford on the left of Manchester United’s attacking trident.

He has been eased into the fold, with Premier League and Carabao Cup action seen in the middle of the park.

His goal account was opened off the bench in a season opener against Crystal Palace, while creativity has been on full display in meetings with Luton and Brighton.

Van de Beek was expected to fill a playmaking post for United, with Solskjaer bringing in another option to compete with Paul Pogba and Bruno Fernandes.

The Red Devils boss has, however, hinted that the Dutchman may be used in a wider role as reinforcements in that department prove tricky to come by.

Solskjaer told reporters of Van de Beek on the back of a 3-0 Carabao Cup win over Brighton:“I think he can play loads of different positions which sometimes is a strength for a player.

“I remember myself sometimes right-wing, left-wing, centre forward, 10 and Donny I think is one of those that the coach would always love to have in their squad.

“Tactically he’s gone through the Ajax system and Dutch football is tactical. He knows football and all the conversations I’ve had with him, you can see he’s got his head screwed on.

“He’s a different type of left-sided player compared to Dan James and Marcus Rashford of course. But coming inside there, finding good pockets, making good runs – yeah why not.”

Solskjaer has also stated that Van de Beek could soon be handed his first Premier League start, with the Red Devils set to return to top-flight action on Sunday with a home date against Jose Mourinho and his Tottenham charges.

“We know how many games we’re going to play this season and he’s going to be vital for us,”Solskjaer went on to say of his latest £35 million ($46m) recruit.

“I think he’s proved in every game he’s been a part of that he’s got high quality and he’s such a clever mover.