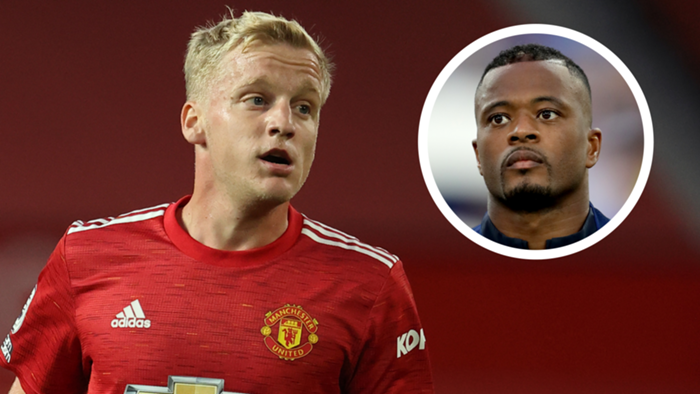 In response to the gradual introduction of his client, agent Sjaak Swart slammed the club, saying Van de Beek's substitute role was unacceptable while adding that United"should have lost 1-7" to Brighton following last weekend's 3-2 triumph in the Premier League.

Evra, the former United full-back, responded on Sky Sports ahead of Sunday's meeting between the Red Devils and Spurs.

“First of all I think the agent of Van de Beek should shut his mouth. Because I don’t understand why the agent now talks," Evra said. “Talking of Van de Beek I think every United fan is disappointed because now it’s three games. He only started one game.

“I don’t think he’s in competition with Paul Pogba, maybe some fans disagree with me. I don’t understand why he’s not starting. It’s like the third game.

“He showed you we don’t need him Pogba. Because when you buy a player normally it’s you need to win the league.

“Is Van de Beek going to win the league for us? No. Actually that’s the point he doesn’t start. I don’t know if it’s injury but the sign you get from outside: you buy Van de Beek, the only signing of United, it’s three games and he doesn’t start. So when you lose the game you already have an excuse.

“The ideal midfielder would be Paul Pogba, Bruno Fernandes and Nemanja Matic. Do you really need a Van de Beek right now?”

While Evra did take aim at Man Utd's only major summer signing, he also restated his frustrations with the club's transfer policy.

So far, the club has failed to close a deal for No 1 target Jadon Sancho, although it does appear they are closing in on a deal for Edinson Cavani.

Even with the introduction of Cavani, Evra believes that United aren't anywhere near title contenders as the Frenchman believes the club has wasted another transfer window.

"No, I’ll be honest," Evra replied when asked if the club are Premier League contenders. "Even the captain Maguire, how many years has he been in Manchester? Just one. He is the captain, it shows you that this club has no leader to win trophies.

"Even with the agent talk, Donny van de Beek, the kid didn’t even start one game and he’s saying, ‘United should have conceded seven goals against Brighton'."

When it was suggested that the coronavirus could be the reason Unitedhave struggled to sign new players this summer, Evra added: "Please, we can’t use the coronavirus as an excuse, please. We have one signing.