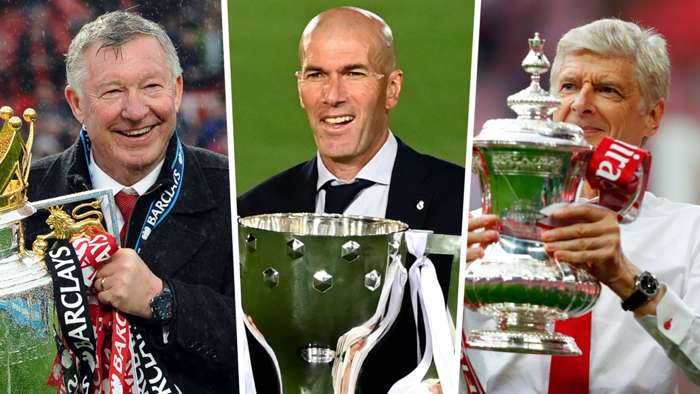 Zinedine Zidane is “untouchable” at Real Madrid and can become the Blancos’ version of Sir Alex Ferguson or Arsene Wenger, says Luka Modric.

The Liga giants are forever looking to the future, with their sights set on acquiring the next ‘Galacticos’ on and off the field.

Zidane has ticked those boxes as a player and manager, with the iconic Frenchman boasting the respect and reputation that has allowed him to prosper where others have struggled.

Two domestic titles and three Champions League crowns have been secured under his guidance, across a couple of spells at the helm, and Modric believes the World Cup winner could emulate Manchester United and Arsenal greats if he decides to stick around in the Spanish capital.

Assessing all of the coaches that he has played under across an eight-year stint with Real, Croatian playmaker Modric told El Partidazo de Cope: “Jose Mourinho was key in my signing for Madrid. I am sorry I only worked with him for a year. I will always be grateful to Mourinho for taking me toReal Madrid. He is tough and strong, but he is honest and always tells the truth to your face.

“Carlo Ancelotti is a spectacular coach. And even more as a person. We played very well with him. We had two spectacular years with him, winning the Champions League and the Copa del Rey, playing great football. I still talk to him from time to time.

“Rafa Benitez hasn’t done well at Madrid but he’s a great coach. That’s football. Not every football coach arrives at a team and has success. I did not have any problem with him. The outside of the boot thing was something that happened in a training session, but it was nothing, we didn’t get on poorly.

“Zizou is a top manager. What he has done with us over the years is unrepeatable. It gives me the feeling that people do not appreciate him as a coach, he is always questioned. He’s one of the best! I wish that all of the world saw him as untouchable at Madrid.

“When you listen on TV or to the radio there are complaints and criticisms of Zidane. There are some criticisms that don’t even make sense. He’s a spectacular coach. The way he fits us is like a glove. He is ideal forReal Madrid. Zidane could be like Ferguson or Wenger in England.”

While Modric has continued to shine under Zidane, not everybody has won over the French tactician.

Gareth Bale finds himself back at Tottenham on a season-long loan after being frozen out of the fold in Madrid.

Modric feels for the Welshman, with the struggles he has endured on form and fitness fronts over recent years clouding the success that he initially enjoyed in Spanish football.

“I have been here with Bale for a long time,” Modric said.

“He’s a spectacular, shy guy. The press are judging him for his recent years, but you have to remember him for everything he has given. He has not had any problems in the dressing room. He spoke Spanish with us.