Alisson injury: How long will Liverpool goalkeeper be out for & which games will he miss?
Match

Alisson injury: How long will Liverpool goalkeeper be out for & which games will he miss? 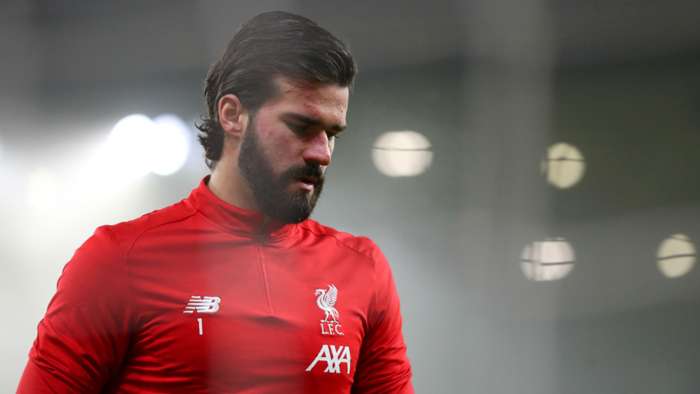 Liverpool are set to be without first-choice goalkeeper Alisson for a number of key fixtures after he suffered a shoulder injury in training.

Alisson isout of action for Liverpool for four to six weekswith a Merseyside derby, their openingChampions League group-stage fixtures and some key games in the Premier League coming up.

“He has no chance to play againstEverton," Jurgen Klopp said after the Villa game, also backing Adrian to step up. “I don't want to put a timeframe but four weeks is possible, six weeks more likely."

Liverpool have at least been fortunate that Alisson was injured on the eve of the first international break of the 2020-21 season.

Brazil are scheduled to play Bolivia and Peru in 2022 World Cup qualifying. Palmeiras goalkeeper Weverton and Athletico Paranaense stopper Santos were the other keepers called up by Brazil boss Tite, with Alisson now forced to pull out of the squad.

After the international break, Alisson will miss the Merseyside derby at Premier League leaders Everton on October 17.

The Toffees have started the season brilliantly and may have a sense of destiny around the fixture – as it comes exactly 10 years to the day since they last beat Liverpool.

After that, Liverpool start their Champions League campaign with an intriguing-looking trip to Ajax, who they haven’t met in a competitive fixture since 1966.

Liverpool also face Sheffield United and West Ham in the Premier League before the end of October, and Alisson also looks likely to miss the Champions League games with Midtjylland and free-scoring Atalanta.

Most concerninglyfor Liverpool, Klopp may be without his first-choice goalkeeper for the Premier League fixture at Manchester City on November 7.

Another international break follows that, and Liverpool will hope to have Alisson back for their games with Leicester, Atalanta and Brighton at the end of November.