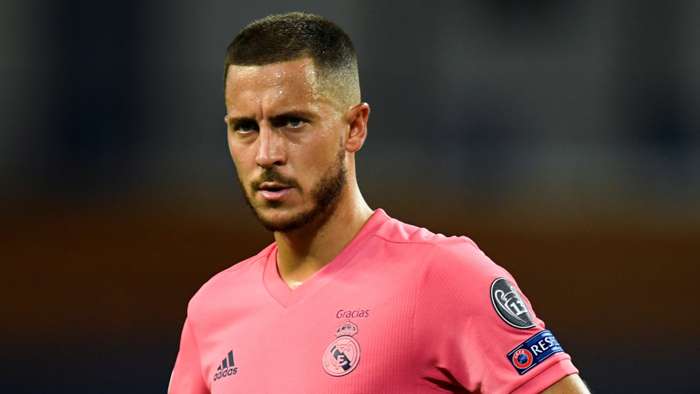 Thibaut Courtois admits Eden Hazard is a "little sad" after the Real Madrid star was once again ruled out of action with injury.

Hazard is yet to feature for Los Blancos this season after injury struggles across the 2019-20 campaign saw him score just one goal following his high-profile move from Chelsea.

The 29-year-old's latest injuryappears to be a muscle injury in his right leg with doubts now over whether he'll be fit in time for the first El Clasico of the season later this month.

Courtois has plenty of sympathy for Hazard and is hopefulthe attacker can bounce back strongly.

"Hazard is a little sad, he was training very well, it's a little setback. It's not the ankle," Courtois said post-match."I hope he's back soon.Hazard was looking forward to playing again."

Prior to Hazard's latest setback, Zidane had hinted that the Belgian was close to making a return to action.

“He is prepared and training well with the team. The issue is that he hasn’t been able to train much until now, but now he is back training regularly. So, we’ll see what happens," Zidane said on Tuesday.

“What he wants is to play. He had a big problem that caused him issues for a long time, but now it seems like he is fine.

“The season is very long and he is a professional. What he wants is to be with his team-mates and to play.”

Real Madrid could certainly have used Hazard's creativity on Wednesday night as they struggled to break down a stubborn Valladolid outfit.

Courtois was quite critical of his side's performance, stressing they need to be faster and more flexible on the pitch.

"When we increase the pace like in secondhalf, we've been better off. The formation doesn't matter, what needs to be done is to fulfill the plan of the coach," Courtois said.

"If you don't move the ball fast, it's comfortable for them to defend. We lacked that speed. If we are flexible in tactics we can surprise the rest of the teams."