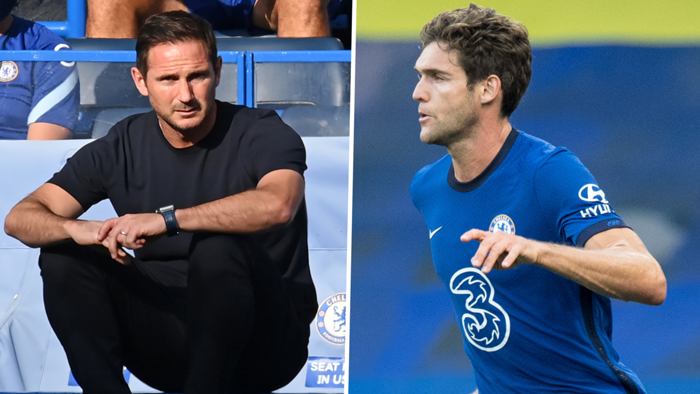 Frank Lampard is readying himself for Chelsea's game against Crystal Palace on Saturday afternoon amid uncertainty in his squad around outgoing transfers ahead of deadline day.

The latest player to see his future thrown into doubt was Marcos Alonso after he was subject to a dressing down by Lampard in front of the squad before being substituted at half-time away at West Bromwich Albion.

Lampard addressed the situation for the first time with Internazionaleinterested in taking him on loan in the coming days. The Blues boss approached the subject cautiously but was clear that he doesn't want to hold grudges with his squad over incidents.

“I am not going to disclose what goes on in the dressing room, I think that would be wrong," Lampard said of the incident which has since been widely reported. "We were disappointed to be 3-0 down at half-time, I had to make changes.

"All I ask from all the players, through the good and the bad, is that the players stick together. That is the only thing which will bring through a successful group. That’s as much as I have got to say on it. It doesn’t affect anything ongoing.

"I cannot have grudges but carry on. We work, we carry on and be honest with each other and carry on to work to get better and better and things happen over the course of a season they happen a lot.”

Fikayo Tomori is likely to stay, and so is Callum Hudson-Odoi despite talk of a loan move to Bayern Munich, but Ruben Loftus-Cheek could make a temporary move. Lampard spoke about the three homegrown stars, with the latter gaining interest from West Ham.

"I haven't got an answer for you on any of those three. I have a good relationship with them all, speak honestly with them, again that's one that we'll broach player by player in the next few days.

"Once the window shuts every player that will be here will be used within our squad, because it's a long season and a lot of competitions coming up. We'll know more on Monday."