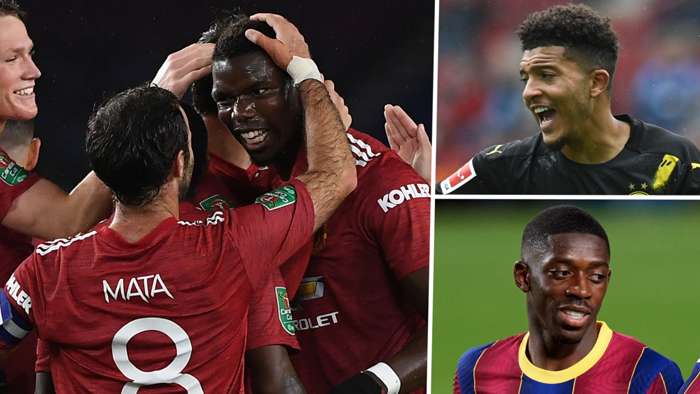 One of their most thrilling performances came away at Brighton, with their slick passing and rapid counterattacks suggesting that a return to the United of old was not too far away.

But after two further visits to the Amex Stadium over the course of the past five days, the mood regarding the Red Devils' performances is one of concern, despite two contrasting victories.

If Saturday's win in the Premier League was as dramatic as they come, then Wednesday's 3-0 victory in the Carabao Cup was far more routine.

Goals from Scott McTominay, Juan Mata and Pogba saw Solskjaer's much-changed side through to the quarter-finals, but against the backdrop of continued transfer uncertainty, this was another display that did little to inspire much confidence of improvement.

United's board continue to work behind the scenes to get deals over the line before the deadline passes on October 5, with Jadon Sancho, Ousmane Dembele, Alex Telles and Federico Chiesa just some of the names continuing to be linked with the 20-time champions.

Any of that quartet would bring dynamism and creativity to a side who, for whatever reason, is lacking the same spark that they showed through the summer.

This was, of course, not United's strongest XI. Only the under-pressure Victor Lindelof remained from Saturday's starting line-up, with the likes of Diogo Dalot, Daniel James and Odion Ighalo offered opportunities to impress.

Unfortunately for them, none of them were able to properly put their stamp on the game, with Dalot and James now potentially set for exits before the window shuts.

It was instead left to Mata to yet again lead United to victory in this competition, just as he did against Luton Town in the third round last week.

The Spain international was again named Man of the Match after he first won and delivered an inch-perfect free-kick for McTominay to head home before scoring himself after linking up well with the ever-improving Donny van de Beek on the edge of the box.

Mata obviously is no Sancho or Dembele, but his performances over the past eight days have illustrated that he still has a role to play, even if his appearancespredominantly come as a substitute.

There were other positives too.

Eric Bailly was faultless alongside Lindelof as he continues to push hard to take the Sweden centre-back's place in the first-choice XI while Fred and Van de Beek both made a strong impact in midfield.

Dean Henderson also furthered his claims for a regular starting berth in goal after pulling off a superb reaction to save at 1-0to deny Leandro Trossard, who in turn must be thinking what he must do to score against United having hit the woodwork on three occasions at the weekend.

Pogba too silenced some of those who have criticised his early-season performances as he and Rashford impressed off the bench, with the France midfielder curling in a free-kick 10 minutes from the end to make the result safe.

That should not mask, however, the shortcomings within United's squad that require fixing in the days to come.

“I can’t concern myself with other clubs. I'vegot to concern myself with what we’re doing," the Norwegian said post-match when asked about potential incomings. "I know the club is working hard to have as strong as squad as possible. Sometimes the speculation is there and we can’t control that."