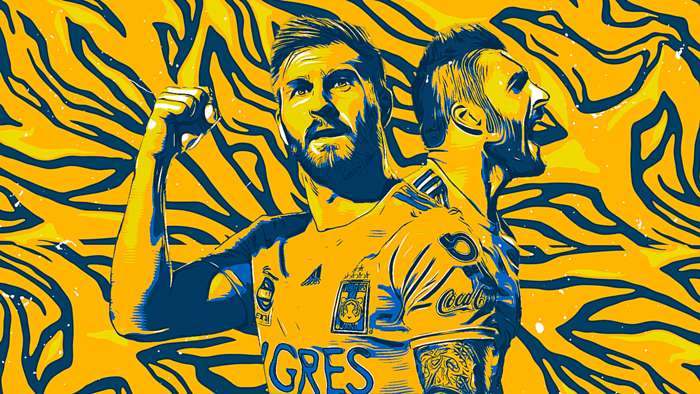 They hadtopped the table during the that year's Clausura, only to fall in the first round of the playoffs to eventual champions Santos Laguna. They were so close, but still so far away from what could have been their second title in four years, one that would have truly established them as an elite force on home soil.

So that summer, Tigres made a splash by bringing in what they thought was the missing piece: Gignac.

It was an unusual transfer from the start. European players generally do notpop up in Liga MX and, if they ever did, they certainly did nothead their in their relative prime.

Pep Guardiola, Emilio Butragueno and Luis Garcia had once called the league home as they closed out their respective playing careers. So too did Portuguese icon Eusebio way back when, with the former Benfica star making a brief stop in Monterrey as part of his late-careerworld tour.

But Gignac, from the very beginning, was one that felt a bit different.

In the five years since, Gignac's transfer has become a turning point in Tigres' long history. His arrival began a period of unprecedented success, one that has vaulted the Francestar into a space all of his own in Mexico's sporting culture.

He hasled the club to four Liga MX titles and, most recently, a CONCACAF Champions League crown. He isthe club's all-time leading goalscorer with 144 goals, more than double the tally ofLucas Lobas in second place, and by the time he is finished, he may just crack Liga MX's top 10 despite spending the first half of his career in his homeland.

His playoff exploits have earned him the nickname "Mr. Liguilla", and his desire to truly embrace his adopted country's culture has made him a beloved figure.

In short,Gignac is an icon, a legend of the Mexican game.

Back in the summer of 2015, though, he was none of those things. Gignac was a World Cup veteran, yes, and a sporadic French international. He was a top player in Ligue 1, but across the Atlantiche was far from a household name.

And so, when rumors began swirling that Gignac was set to become Tigres' next big signing, Torresdid what anyone else would do: he looked him up on YouTube.

"Nobody knew who he was," Torres tellsGoal,"but when I heard he was coming to the team, the first thingI did was start looking up YouTube videos to see who I was going to play with and how I could help him out scoring goals.

"Thefirst thing I saw was justthe YouTube videos, andI sawa killer forward. Everychance he had was on target, it was a goal. I knew he was a killerin front of the goal and thatwas a good thing for us because we neededa forward like that on the team."

Within his first few games, Gignac had netted his first goal against Brazilian side Internacional, helping send Tigres to the Copa Libertadores final. In that final, Tigres would fall short againstArgentinegiantsRiver Plate, but very soon the trophies did start to flow.

Gignac scored11 goals during his first Apertura campaign in Mexico, leading Tigres to the playoffs. He scored in each leg of the quarter-finals against Chiapas, eventually pushing Tigres through to a final against Pumas.

Once there, the Frenchman scored a goal in each leg and eventually converted once again in the penalty shootout, securing the first of several titles in the process.

Torres' first impression could nothave been more accurate: Gignac was exactly what Tigres needed. Nearly six years on from his arrival, Gignac has shattered several records, establishing Tigres as a legitimate powerhouse both domestically and across North America.

"I knew he was going to do great things," saysTorres, who departed Tigres in 2019 after winning five trophies alongsideGignac."As the games go by, the years went by,he was a great player., He makes the difference right away. He's a guy that works hard on and off the field.

"I'm still close with him. I talk to him every once in a while, I have a good relationship with basically all my team-mates, but he's just a different guy that's on a different level."

That was notjust on the field either,it was off of it too. Part of the allure of Gignac was that he chose both Tigres and Mexico.

The season before he arrived in Liga MX, he scored 21 goals for Marseille, even more than Paris Saint-Germain starsZlatan Ibrahimovic and Edinson Cavani in that campaign. Despite offers from the Premier League,at the age of 29 Gignac decided on Tigres as his next destination.

From the moment he stepped foot in Mexico, Gignac did nottreat his time in Liga MX as a stepping stone nor a layover. He immersed himself fully in the country and its culture. He embraced his role in Mexican soccer off the field while dominating on it, endearing himself toteam-mates and fans alike.

“I arrived in 2015 with Andre and JavierAquino," Mexicointernational Jurgen Damm tellsGoal. "Gignac already more or less spoke a little Spanish, obviously not like now, but he is a professional in every way.

"He loves to be very good at everything and the truth is that he wanted to dominate the language from the beginning because he was going to be in Mexico for a long time so it would be easier for him to be able to communicate in Spanish. Over time, he improved it, he dived right into learning it and nowadays speaks like any Mexican!

“I believe that if something has to do with his success, it is his simplicity and charisma. His way of relating to other team-mates is impressive. His treatment of his team-mateshas always been very good since he arrived. Until now, he has been the same guy: a balanced person, a great friend to everyone.

“Leadership has always been in his DNA. He is someone who talks a lot in the dressing room. He supports young people and experienced players a lot."

But, until fairly recently, there was still one key achievement missing on Gignac's resume: the CONCACAF Champions League.

He hadguided Tigres to the final three times in four seasons, only to fall to Mexican rivals Club America, Pachuca and Monterrey at the final hurdle.

That was, until the most recent tournament. In a CCL campaign that stretched nearly a full year due to the coronavirus pandemic, Gignac once again fired Tigres to the competition's final game. Once there, they ran into Los Angeles FC, led by Carlos Vela, a Mexicointernational that has been competing with Gignac for the title of best player on the continent.

After going behind early in the second half to a Diego Rossi strike, Mexicointernational Hugo Ayala leveled the scoreline in the 72nd minute. From there on, you knew what the ending would be, as well as who would be the man towould provide it.

Gignac's 84th-minute winner was a dagger, the long-awaited release of euphoria for a team that had won just about everything but this competition. It was fitting that it was the veteran forward that had lifted Tigres to new heights, only because he had done itso often before.

For Tigres, the fourth time was the charm and, for Gignac, legendary status was officially sealed, even though it probably had been already.

"Finally," Gignac said moments after the match with an exhale. "We finally won that f*cking cup!"

Tigres' tournament run begins on Thursday against South Korean outfit Ulsan Hyundai. The winner of that will book a date with Copa Libertadores champions Palmeiras, who themselves will be riding high after a stunning win over rivals Santos on Saturday.

Waiting for the winners in the final will almost certainly beBayern Munich, a team that is almost universally recognized as the world's best.

To reach a date with Bayern would be uncharted water for a Mexican club. But, with Gignac up top, it iscertainly not out of the realm of possibility for Tigres.

"Not only is Gignac is a world-class player; they have a top goalkeeper like Nahuel Guzman, a very solid defence, a great winger like CarlosSalcedo, the midfield with GuidoPizarro and Carioca, good wingers, and forwards now with the new additions likeCarlos Gonzalez," Damm says.

"I feel that it is a very strong and competitive team with many possibilities to have a great tournament and provide a surprise to the whole world."

It would be a surprise, certainly, but anyone who has followed Gignac's time in Mexico can see it coming. It isjust another chance at a legacy-defining moment for a player that now has a career full of them.

But even if Club World Cup success does notcome,Gignac's reputation is solidified. He isarguably the most important signing in Liga MX history, a player that has done everything that ever could have been asked of him since the moment he stepped off the plane.

"I think he's the best player in Mexico right now. He's a top-paid player, and he's worth it. He's a beast, man. He's like the Black Mamba of soccer, you know?"

Damm adds: "He's a role model wherever he is seen. From the beginning, we felt his presence, his quality, and his goals. He is the most important signing in the history of Tigres."

A legend, an icon, a leader and a friend. Mexico's Black Mamba, Mr. Liguilla and the King of Tigres.