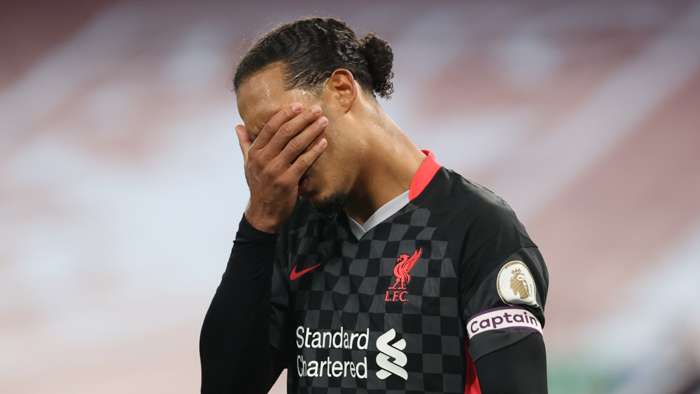 Liverpool defender Virgil van Dijk has called for calm after seeing his side suffer a humiliating 7-2 defeat at the hands of Aston Villa in the Premier League on Sunday.

This was the first time the Reds have conceded seven goals in any competitive game since 1963, while theyare the first reigning English top-flight champions to ship so many goalsin a league match since Arsenal did so against Sunderland in1953.

While a monumentally bad result for Liverpool, Van Dijk was quick to pay respect to Dean Smith's side and called on his teamto react appropriately to the defeat.

"It's hard to lose the way we lost tonight. First and foremost well done to Aston Villa, we have to give them the credit they deserve," Van Dijk told Sky Sports post-match.

"It was one of those performances where we weren't 100 per centat it from start to finish. The goals we conceded we should have done, but also the chances that we had, we should have done better. Overall we're all disappointed, we shouldn't have lost with the numbers that we did but it's about sticking together and making sure it doesn't happen again.

"You can't take the credit away from Aston Villa, but we should have been more clinical. In all aspects of the game we should have done much better. It's important not to get crazy but we've got to step it up and the performance level between the Arsenal league win and today was too big."

On theabsenceofSadio Mane and Alisson, he added:"We prepared well and we played a good game against Arsenal in mid-week. Our preparation was good and we were ready for it before the game. Unfortunately in the game it didn't happen how we wanted it to."

Aston Villa forward Ollie Watkins claimed a hat-trick against Liverpool and believes he should have had even more goals to his name.

"I can’t believe it really. Getting one goal is good but three is unbelievable. I think 1-0 up gives us confidence, we grew into the game and punished them," he told BBC's Match of the Day.