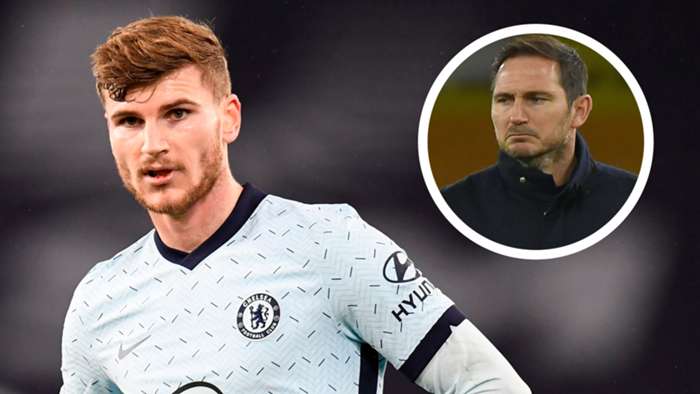 Timo Werner admits fears of not finishing in the Premier League top four had started to form at Chelsea before Frank Lampard was relieved of his managerial duties and Thomas Tuchel wasappointed.

They were, however, to find themselves stuck in reverse beforeclub legend Lampard departed and Tuchel was brought in to oversee a Champions League push that has delivered 10 points from his first four fixtures at the helm.

“If we go back three or four matches, when the manager was not yet here, we were nine or ten points behind the top four,” Werner toldChelsea's 5th Stand appafter the2-1 win over Sheffield United

“We watched the table and were like, ‘oh, it might not be so good at the end of the season’. Now we are really good, back in shape, and I think if we keep going like this we can put more pressure on the other teams."

The former Borussia Dortmund and Paris Saint-Germain boss has made an immediate impact at Stamford Bridge.Chelsea had been on a run of one win in five Premier League games prior to his arrival under Lampard seeing the wheels come off his reign.

Tuchel has rediscovered lost momentum, with his side conceding only once in a run of three wins and a draw.

The Blues are now up to fifth in the Premier League table, just one point back on title holders Liverpool and the final Champions League spot.

Chelsea have a testing run approaching that is set to take them through to the end of March.

Their next six Premier League games include outings againstManchester United, Everton, Leeds and Liverpool, while there are also FA Cup and Champions League fixtureswith Barnsley and Atletico Madrid.

Tuchel will want to see current standards maintained in west London and could do with Werner finding his shooting boots again as the Germany international has netted just once in his last 20 appearances for club and country.