Women’s Super League braced for epic title battle - but will Arsenal even be involved?
Match

Women’s Super League braced for epic title battle - but will Arsenal even be involved? 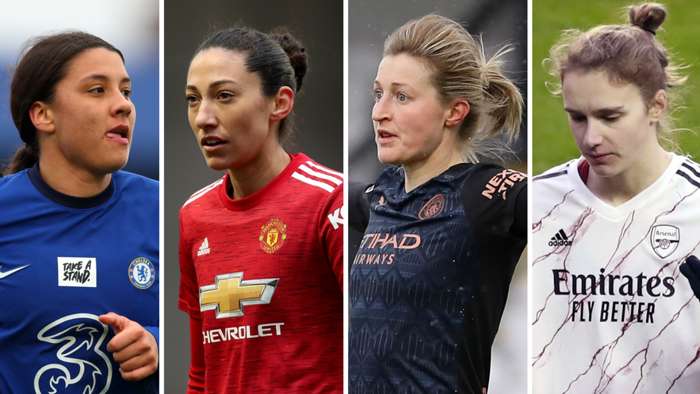 Just under two years ago, Arsenal were crowned champions of England in emphatic fashion, ending the campaign with 18 wins from 20 games.

Fast-forward to this season, though, andjust one game into the second half of their 2020-21 campaign, the Gunners’ title challenge is hanging by a thread.

Defeats for table-toppers Chelsea and second-placed Manchester United on Sunday had offered them a way back into the race on what proved to be a chaotic afternoon in the Women’s Super League.

Brighton, who lost to bottom club Bristol City last weekend, shocked the Blues, ending the defending champions' record-breaking 33-game unbeaten run in the WSL with their first league win in seven games. It was Chelsea’s first league defeat for over two years.

“The Manchester United result today and our result serves as a reminder that if you’re not on it in this league then you can be turned over,” Chelsea manager Emma Hayes said afterwards.

Reading’s win over United was a little less shocking, with the Royals a well-established top-half team, but it was still against the odds.

Casey Stoney’s side had lost only once this season and that came away atChelsea.

Had Arsenal picked up a win at home to Manchester City, then, they could have closed the gap to the top three – who are all currently on course to earn Women’s Champions League football next season– to just four points, with a game in hand.

The gap to the top two, Chelsea and United, would have been six points, with a game in hand over the former and two over the latter. It would have still been a big task, but victory would have given Montemurro's sidea real glimmer of hope.

Such an opportunity was huge, but Sunday, in the end, was City’s day.

With the top two stuttering, Gareth Taylor’s side secured a 2-1 winthat reminded everyone of their own title credentials. They are now two points off the pace and have a game in hand over United.

Despite scoring 18 goals in three league games in January,including successive seven-goal haulsagainst Aston Villa and Brighton, it feels like City have slipped under the radar.

But their consistency against the teams below them in the league could prove most important of all as the season unfolds. It isalmost three years since Citylost a WSL game to a team that was notChelsea or Arsenal.

“Only having 12 teams in the league, it's very difficult because you have to be consistent,” Taylor said after the game.

“When I heard that result, with Chelsea, it was a real surprise, but it's very hard. They've had a real good go Chelsea, they're a very strong outfit, the same as Manchester United.

“They put performances together, they got wins and a lot of people will be looking at those two results today and saying they are a shock. They are a surprise, but this is football. This is why we love it. It happens.

“Fortunately for us today, it hasn't happened to us and we move on to the next game.”

That next game is massive. City host local rivals United on Friday night in a fixture that has all the makings of a classic.

Arsenal’s next game might be even bigger, though. On Wednesday evening, Montemurro’s side make the short journey across London to facechampions andleague leaders,Chelsea. Another defeat would surely end any hope of another league title and leave a huge dent in their Champions League aspirations, too.

The positive spin is that it gives the Gunners an immediate chance to bounce back in a game that their manager did notshy away from labelling as "season-defining"last week.

“I said after the game: 'Look, we can't overthink what's happened today. What we need to do is now re-focus and make sure that we were prepared for another big game',” Montemurro said on Sunday.

Those circumstances are difficult ones for the Gunners. They had played one game in seven weeks before Sunday after weather and Covid-19 cases wreakedhavoc with the WSL schedule.

Add in that four, arguably five, regular starters were missing at the weekend due to injury and it isnot easy for them at the moment. Confidence is not sky-high either, with one win in five games.

But as a man who took the league by storm with his title-winning team two years ago, Montemurro will notgive up - and neither will his players.

“There’s a lot of football still to play,” he said. “I wouldn’t count us out just yet.”