Alisson, Fabinho and Mane all in contention for Liverpool return against Manchester City
Match

Alisson, Fabinho and Mane all in contention for Liverpool return against Manchester City 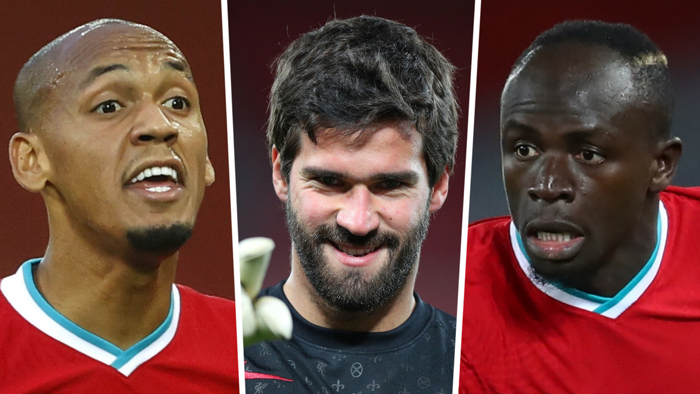 Jurgen Klopp has been handed a triple injury boost ahead of Liverpool's clash with Manchester City, with Alisson Becker, Fabinho and Sadio Mane all set to return to action.

Fabinho has not featured since the FA Cup defeat to Manchester United on January 24 due to a muscle issue, while Mane has missed the last two games after picking up a problem in the win at Tottenham.

"Sadio and Fab will be in parts of team training today," Klopp told reporters at his pre-match press conference on Friday."Then we will see."

Alisson, meanwhile, missed the loss to Brighton due to illness but is expected to replace Caoimhin Kelleher in goal against City.

The Reds boss also confirmed that new signing Ozan Kabak could be available to make his debut, having received international clearance following his loan move from Schalke on transfer deadline day.

"Great news," Klopp said. "With our situation we will see who can play, who cannot and who should not play again.

"In an ideal world you have a few weeks to work together on defensivethings, organisation and all this stuff. Ben Davies and Ozan trained yesteday and had an analysis meeting where they were shown all the stuff we usually do, like a centre-half movie. Then today, proper session. Tomorrow, proper session, and we will see. I don't know yet who will play."

Liverpool go into the game seven points behind league leaders City, who also boast a game in hand. It is a stark contrast to last season, when Klopp's side were dominant as they romped to the Premier League title in stunning fashion.

Klopp, though, says his players will not be affected by the league table.

"You have to win football games," he said. "If you do that often enough then there comes a specific moment in the season where it's clear;now we go for it.

"In the last few seasons we were in that situation, but now we are not. Why should we think about it? We have to think about collecting enough points that in April and May it might happen again.