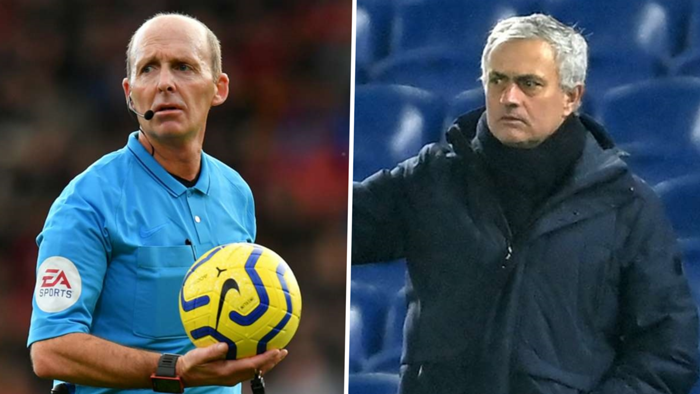 Tottenham manager Jose Mourinho has expressed his sympathy for Mike Dean after the referee was on the receiving end of death threats.

The referee joins a number of people involved in Premier League football who have been abused online recently, including Manchester United'sAxel Tuanzebe, Marcus Rashford and Anthony Martial, and Chelsea's Reece James.

"This week was for them, the week before was for others, and if the situationgoes in the same direction, next week will be others.

"I think something has to be done, because one thing is professional life and what we do in our professional lives, and the success we have, the mistakes we make, the frustrations we have.

"Another thing is to go to the private life and go to the social life. Then, of course, something has to be done."

Near the end of the Premier League match against Fulham, Soucek was trying to create space and appeared to accidentally catchAleksandar Mitrovic with his elbow.

Dean was summoned by the VAR and following a review of the replay, the referee gave the Hammers star a straight red card.

Dean has asked to not be involved in any Premier League games this weekend after he and his family were targeted with death threats online.

Soucek took to Twitter on Mondayupon learning of the abuse Dean has received.

"I don’t like hearing about it interfering with personal life and I send Mike Dean and his family my support. There is no place for abuse of any kind. It is in the past and I’m now focused on the rest of the season."

Dean has reported the threats to the police.