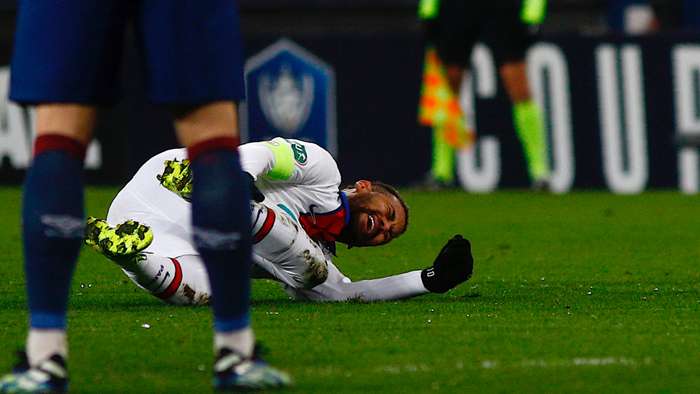 Paris Saint-Germain have confirmed that Neymar will be sidelined for approximately four weeks, meaning he will miss the first leg of his club's Champions League tie with Barcelona.

The club will also face a nervous wait to see if the Brazilian will be fit enough for the second leg, with that clash roughly four weeks away.

The Ligue 1 champions kick off their Champions League last-16 tie against Barcelona next week, having fallen at the final stage in 2019-20.

The ex-Santos and Barcelona forward started for his side in a Coupe de France clash with Caen on Wednesday as one of few regular first-teamers as Mauricio Pochettino rotated his XI for the round-of-64 encounter.

PSG made the breakthrough just after half-time, when Moise Kean hit the back of the net.

But the club's joy proved short-lived when 64 minutes into the game, Neymar went down holding his left adductor muscle.

The Brazilian disappeared straight down the tunnel, with Kylian Mbappe called off the bench to replace his usual strike partner.

It is not the first time Neymar's health has taken centre-stage ahead of a key European knockout match.

In the 2017-18 season, his first since completing a world-record transfer from Barca, the striker fractured a metatarsal bone and missed the last three months of the season, during which time PSG bombed out of the Champions League last 16 at the hands of Real Madrid.

He then suffered an almost identical fate in January 2019, and could only look on as the French side were upset by Manchester United at the same stage.

The first leg of the blockbuster Champions League tie kicks off on Tuesday at Camp Nou.

Barca will then travel to Parc des Princes for the return leg on March 10.