Reynolds to Roma: How the Giallorossi won their 'bidding war' with Juventus for US ace
Match

Reynolds to Roma: How the Giallorossi won their 'bidding war' with Juventus for US ace 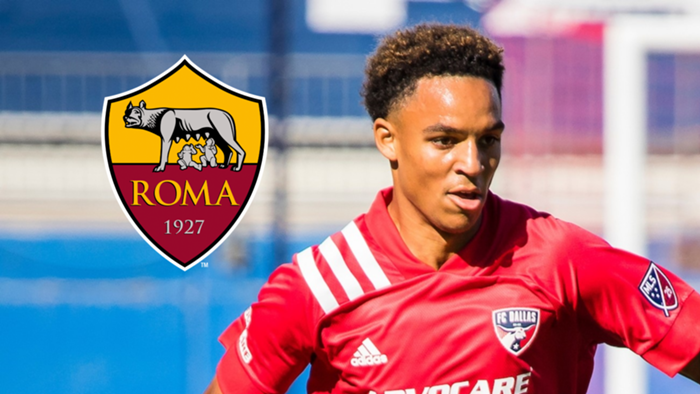 The transfer saga is over, and what a long and winding one it was. Stop, start, change directions. But, nevertheless, here we are:Bryan Reynolds is now, officially, finally, a Roma player.

The 19-year-old is not expected to facehis former suitors, having only just started training at Trigoria. But he'll certainly be watching on intently as the two clubs do battle in Turin, with third-placed Roma just one point ahead of Juve in the Serie A standings.

It is a vital match for the visitors, with the cash-strapped Giallorossi desperate to secure the top-four finish that would grant them a badly-needed return to the Champions League for the first time since the 2018-19 season.

Of course, they could yet challenge for the Scudetto, given Paulo Fonseca's side are justsix points behind leaders AC Milan, who have lost two of theirlast five league games.

However, it's also a massive match for Juve, as they look to maintain the good form which has propelled them up the table. Andrea Pirlo's first season in charge has had its ups and downs but, despite it all, Juve are backwithin striking distance as the calendar turns to February.

Their revival looked set to be boosted by Reynolds' arrival from FC Dallas. He certainly looked anatural fit for the Bianconeri, who had already been buoyed by the instant impact made by another American, Weston McKennie, who joined from Schalke at the start of the season.

Once they formally submitted their bid,Juventus had little doubt that they would land Reynolds. They were willing to pay afee of around€6 million ($7m)and planned to send the teenager toBenevento for the remainder of the 2020-21 campaign due the currentlack of non-EU spots in Pirlo's squad.

Reynolds would then return to Turin in the summer to properly begin his Juve career. That was the plan, at least.But there was one problem Juve didn't account for: Roma.

For starters, the Giallorossiwere willing to pay more while also including a sell-on clause to sweeten the deal for FC Dallas. The transfer is structured as an initial €100,000 loan with an option to buy for a fee of €6.75m($8m). On top of that, there are several performance-related bonuses that could end up being worth a total of €5.65m ($7m).

At the end of the day, Roma meant business, and they brought out their checkbook to prove it.

“We actually had a bidding war among several Champions League teams, which is a new dynamic," CEO and chairmanClark Hunt told reporters on Monday."I think that says a lot about where our academy is, but it also speaks to the quality of the American player."

Perhaps just as importantly, though, Roma offered Reynolds a clear path to the first team. Instead of a stop-start beginning loan at Benevento, Reynolds will be thrust right into the middle of a Serie A title race.

“Me and my family were happy that there were a lot of clubs interested in me. But I chose Roma because I think it’s the best choice for me," Reynolds said at his introductory press conference.

"It was the development plan; going straight to the first-team, training every day with them...I think that was going to be the best choice for my development.

So, now thatReynolds has finally signed on the dotted line following a number of false starts and surprises, what happens next? Can we expect to see the American in Roma's starting line-up in the coming weeks?

His potential is undeniable. Reynolds has beencompared to Trent Alexander-Arnold thanks to his attacking skillset, so he looks ideally suited to the wing-back berth on the right-hand side of Roma's 3-4-2-1 formation.

With extra coverbehind him, his defensive weaknesses are less likely to be exposed as he adjusts to an entirely new level in Serie A.

He clearly has much to work on. Roma have undoubtedly made this deal with one eye on the future. But while he is unlikely to feature against Juve, do not be surprised if Reynolds quickly forces his way into Fonseca's thinking, given his numerous attributes.

“What I think I am good at is obviously attacking, getting forward," Reynolds said of his own game."I think one of my strengths is my physique; I’m strong and I’m fast and I like to think I am a pretty good crosser.

"What I think I need to work on is my defensive abilities and my defensive positioning. I think I am pretty good in duels but I think the most important thing is learning the tactics and the Roma way.”

He added:"As far as players go, Inter's Achraf Hakimi and Juventus' Juan Cuadrado are two that I look up to because they are so attack-minded as players, and that’s howI like to see myself in that right wing-back role.”

When Reynolds does eventually make his debut for the club, he'll become only the second American to feature for Roma, following in the footsteps of Michael Bradley. To date, few Americans have been able to thrive in Serie A but McKennie has shown Reynolds the way forward.

“Obviously it will take some time to adapt to such a high level like Serie A and a big club like Roma, but I don’t think I will have a problem with that," he said.